Last night we left Moscow for St. Petersburg by train. It was only a short 7 or 8 hour trip that was scheduled in a way that we left at 11 pm and got to St. Petersburg at 7 am. 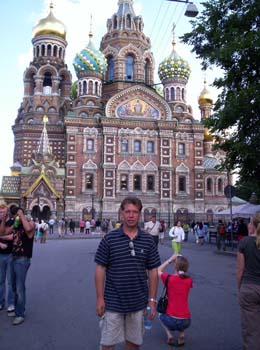 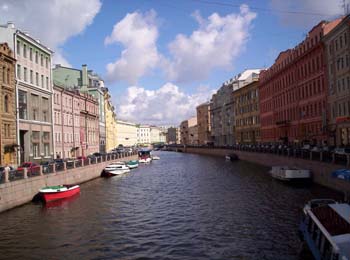 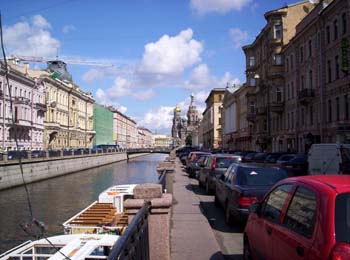 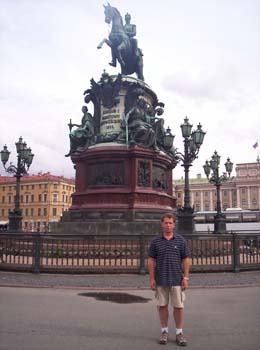 There is really not I can say about St. Petersburg that will do it justice. The city once known as Leningrad is probably the most impressive city I’ve ever been in. Nearly every building looks like it was built in the 1600s, people walking everywhere, beautiful statues and memorials wherever you go, complete with canals that break up the city. It really is one place that most people should see. I have been told that Prague, in the Czech Republic is the most beautiful city, but until I actually get there next week St. Petersburg is my favorite. 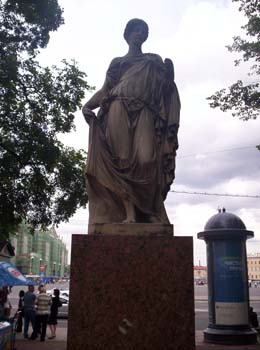 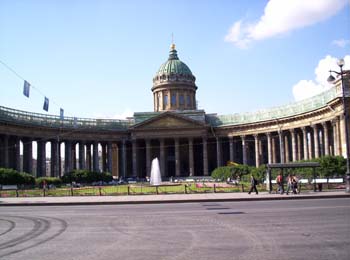 Tomorrow we go to the Hermitage and do a few other things. The tour ends in two days, and I leave for Tallin, Estonia.

Okay, now I probably need to apologize for my initial perspective on Russians. I still think that Russian men, that are not in large metropolitan areas are basically mean drunks who can’t keep their shirts on. I guess the border crossing started the feeling that all Russians are mean people, and tonight in St. Petersburg I’ve had a few people come up to me and talk… well they tried, but since I don’t speak Russian it was a difficult conversation. So, and Russians that are reading this, or have read the post where I was maybe a little too critical on the Russian people, let me say that I’m sorry… kind of.

The ride to Moscow was a little bad and a lot good. I got tired of the cramped quarters and the lack of privacy. After the four-day train trip we did get to Moscow (unfortunately) and were transferred over to a different tour leader.

Moscow was okay. I don’t want to make it sound like it was bad, but for the most part it’s just a big city. The people move fast and rarely acknowledge anything or anyone around them. For me, prior to getting to Moscow the best part of the tour was meeting or interacting with the residents of the countries I was in, but in Moscow it was very difficult to meet anyone. They just don’t open up from what I can tell. Red Square and the Kremlin were impressive, but after that there wasn’t very many “touristy” things to do. We walked around a lot and took the Metro (subway) to all parts of the city. It was the first time that I’ve ever been in a subway, and I have to admit it was fun. I mean, just getting to the trains was an experience. 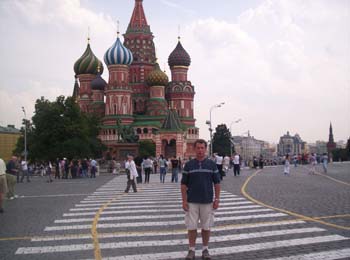 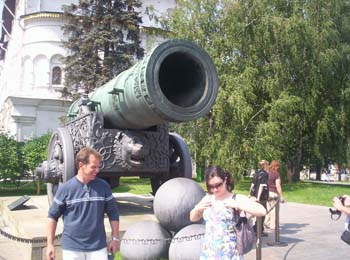 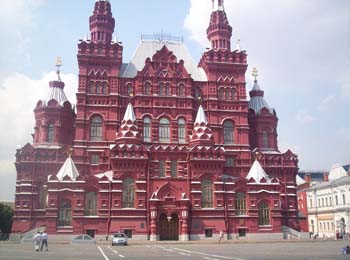 First you have to go down about 200 meters just to get to a platform. Now you have to imagine that you are traveling at somewhere about 4 mph at an angle of about 60 or 70 degrees… it’s like your on the express to hell. When you get to the bottom everyone seems to be on a mission, they know where they are going, they don’t look around, and to the unwary it is easy to be just swept along with the flow of the group. Some of the platforms are beautifully decorated though. We went to about 3 different platforms that are listed as being some of the most ornate Moscow has. The ones that we went to had ceilings with mosaics of Lenin with the hammer and sickle, there are busts of Lenin, and chandeliers down the whole platform. To some of the guys that I went with it seemed like a waste of money, but to me it seemed more like homage to the working man.

Today we’re on our train ride to Moscow. We left Irkutsk about 10 last night and so far the ride has been pretty good. I’m not very good when it comes to tight spaces and no place to be alone, but for the most part it has been a pretty good ride. – Well, it’s been five days since I wrote in the journal, so now I’m trying to remember what has happened almost a week ago.

Just wanted to let anyone know who’s keeping up with what I’m doing that I’ve gotten behind in my blog. There has been so much to do, so many things to see, and so much beer to drink that It’s left very little time for any deep blog entries.

So if you’re keeping track, sorry about that. If you’re not, then nevermind.

I’ve made it to Russia, though I’m not sure it’s such a good thing. J

I’m in a b&b outside of Irkutsk, Russia on the shore of Lake Baikal. It’s overcast and about 50 degrees.

One of the things that I would like to write a little about is Mongolia. I left Ulaanbaatar about two days ago, and I’m still thinking about it. Mongolia is one of those countries that most people, if they’re like me, don’t really think too much about. It’s surrounded by two super-powers that seemingly suck away the attention that Mongolia rightly deserves. When I got there I didn’t have any idea of what to expect so I was surprised to find it a great country filled with friendly people. Many people on the tour didn’t enjoy Mongolia the way I did, but for some reason the Mongols treated me differently. I don’t know if it is my blue eyes, or the perma-grin that I seem to wear whenever I’m somewhere new, but whatever the reason, the people were very friendly and seemed to go out of their way to say hello. Speaking of the people, the Mongolian women are absolutely beautiful; nearly all the guys on the tour have made comments along the same lines of how impressed they were with the Mongolian women.

The train ride to Irkutsk:

After our two-day trip from Beijing to Ulaanbaatar on the train, I thought that I’d be an expert on riding the train for long distances, unfortunately though I found out very quickly that was not the case. The Chinese/Mongolian trains are much better run than their counterparts in Russia. Russian trains don’t give any meals, the staff are very rude, and there is no air circulation except for open windows, but with the temperatures fairly warm outside there was no rest from the oppressive heat in the carriage. At least on the Chinese trains they would let us get off the train to buy cold drinks along the way, the Russian train that we were on only stopped twice in about thirty-six hours, long enough for us to get off and walk around a bit. It was kind of funny, the first time the train did stop long enough for us to get off, three of our group were left behind. They said that they saw the train pull away and knew there was no way for them to catch up to it. They ended up catching a taxi to meet with us a few hours later. I actually kind of envied them, two hours less time in the train.

One of the things that I should have expected, but didn’t realize the reality of the situation was the border crossing into Russia. I woke up yesterday morning at 7am, the train was stopped and I had no clue of where we were. As I write this the whole morning is a little bit hazy in my memory. Anyway, I look out the window and the train is surrounded by a security (barbed wire) fence, and I see about 10 soldiers and one dog walking towards us. When they get to the train they start making us get undressed and told us to lean against…. Just kidding, they told us to get into our cabins, get our luggage in front of us, and have our passports ready. It was really a sense of old-world Russia for me, actually it was more like a WWII Nazi feeling for me than anything else. While we were sitting there, we could hear people walking on the roof, and I could see the dog walking along the train. What really surprised me was the compound that they had our train in. Like I mentioned we were surrounded by a fence, but it was really much more secure than just a fence, there were guards posted all over the place, there was more than just one fence, and the locomotive was not there. The only thing in this compound were two train cars and a bunch of shocked tourists… well, at least I was shocked.

So, like I mentioned I’m sitting in bread and breakfast overlooking the shore of Lake Baikal, and I’m trying really hard to think positively about Russia right now. It hasn’t been easy though. Yesterday on one of our stops, I bought a 7-Up and a few waters for later. I was with a couple guys as we made our way back to the train, a Russia guy smiles, points to my 7-Up, and says something that I don’t understand. So in a little bit of confusion I kind of hand it to him… still don’t know why I did that, but he takes it opens it up, takes a drink and gives it back to me and says thank you. What? I mean, What? Never would I have expected that… Kind of funny though.

Like I said, I’m trying to stay positive. This morning at the B&B we had the best pancakes that I’ve ever had in my life… they didn’t look like pancakes though. They were small and very thick, but damn they tasted good.

This afternoon I stayed behind while the rest of the group went to a local museum and a hike up to a viewpoint. I kind of wanted to go, but after the harrowing trip on the train I kind of just wanted to be alone, so I kind of just did some little things like clean up my backpack and write on my journal. I really think it was a good decision in the end. About 2:30 I ended up meeting the group for lunch, and even that went really well, before they showed up I sat in a nice little café sipping on a cappuccino overlooking the lake. It was very relaxing and just what I needed. Later we took a lake tour for about an hour.

For the record, I’ve started to like it here in Russia.