Okay, so here I go again and trying to close the blog. I recently changed servers to a more improved server… a dedicated one that I have total control over. Though with the amount of small problems I’ve been having with it, I don’t know if I was actually ready to take control. :)

This is my closing entry for the winter vacation, and although I don’t think anyone read it as I was traveling, there have been a few that have since I got back. Generally speaking the trip to Southeast Asia was great, a little bit too fast, but still an experience that I feel fortunate to have had. There are things that I hope I’ll never forget, like the cruise of the Mekong River, and spending New Years dancing next to a bonfire as fireworks go off overhead. I really can’t explain what it was like, surreal in some ways, but the image I have in my head is more like, “how lucky am I?” So that’s not so much an image, but hopefully you get the idea.

Anyone that stuck with me this trip, not that I think anyone did, but I would just like to say thanks, and I hope you follow my summer trip to probably Southern Africa.

Just like the other post, I’m adding all photos and most of the movies that I’ve taken along the way. This group is of the Mekong River journey, with some photos of our overnight stay at a small river town. You can access all images, not just those of the Mekong at Photobucket.com

Some sample images from my Mekong River Cruise. More

Bangkok City Center and the Floating Market outside of Bangkok.

More movies from Bangkok and the Floating Market

Right now it’s the morning before I leave for Dubai, and most of the last three entries have been written this morning. I leave for the airport in about 20 minutes and although I have much more to write, I need to finish packing. My next entry will probably be when I’m back home.

I’m in the Hanoi International Airport right now. I was packing up and getting ready to go and realized that I couldn’t find my camera. Shit. I got a call from the front desk of the hotel telling me that the driver was waiting to take me to the airport, so there I am scrambling around looking for my camera with no time to go through all my stuff to see if I packed it somewhere strange. Anyway, I didn’t find it, but to be honest, if I was going to lose it the timing couldn’t be more perfect. The display was broken so I was going to have to buy a new one when I got back to Dubai anyway, and except for the sdcard and the photos that were on the camera, there really isn’t anything to be sorry about.  I keep trying to tell myself that, and in time I think I may actually begin to believe it. J

The next day we did a tour of the city. We went to Ho Chi Mihn’s tomb, Hotel Hanoi, and a 1k year old temple. All of it, except for the temple, was kind of strange for me. I grew up thinking of Ho Chi Mihn as someone akin to Stalin, not a glorified leader that freed his people from bondage, but that’s the way they seem to want to portray him here. Our guide actually said that in the North, the people love and revere him, and in the South they don’t. Our guide is from the South, and although he didn’t really say how much he dislikes Ho Chi Mihn, he did tell us things that make it sound like he’s hated in the South. Our guide made a comment that many people feel cheated in the South, that they believe that if not for the war, they would be a city much like Hong Kong, or Singapore right now. Our guide really helped me to understand the way Vietnam is. When I got here, I didn’t see Communism, I just saw a city doing the things that cities do, but after talking to our guide I see some of the things that make this kind of a dreary life for many of the people in the city. 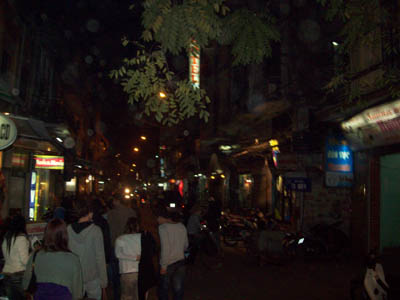 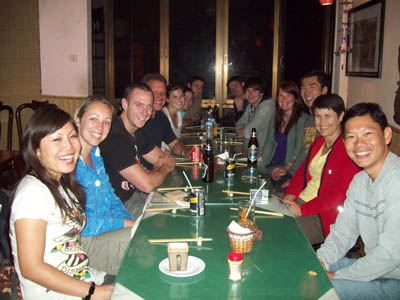 After our walking tour we went back to the hotel. This was the official ending of the tour and I needed to move my stuff over to a different hotel. I calculated the days incorrectly so I have an extra day here in Hanoi before my flight back to Dubai. The extra day was needed for me to get my feelings in order on Hanoi, and in some ways the tour in general. I did some souvenir shopping, and then found a café and had a few beers and watched the people go by. That’s one thing that I did a lot of during the summer, and the one thing that I haven’t had a chance to do very much this winter, just watch people. We always seem to be moving, either by tour design, or as a group to go have dinner. Just drinking a few beers watching the traffic and people go by is a necessity for me. I may have started a little too early though, because at about 6pm I had a strong buzz and needed to get something to eat. Not a big deal if you know where to go, but if you’re in a place where the landmarks are scarce, traffic is dangerous, and you can get sick eating at just any old restaurant it can be a very big deal. So I did what I usually do, go to some place where I’ve been before, KFC. I did get lost about three times, but I eventually found my way there and ate.

We got into Hanoi early in the morning, and stored our bags before we headed out to take a cruise to see the Ha Long Islands… This cruise isn’t part of the tour but we all wanted to see them, so as a group we hired a driver and headed to the coast. I don’t know if anyone reading this entry will be familiar with the Ha Long Islands, but my guess is that most people have seen them, or seen something very familiar. The best way to describe them is that there are thousands of jungle covered rocks, or islands, off the coast. They’re very beautiful, so beautiful, that there is a push to get them included in the list of the Natural Wonders of the World, along side such landmarks as the Grand Canyon. I can’t say that they are awe-inspiring, but they are very beautiful. Our drive took about three hours and through what seemed like one large suburb of Hanoi. I, like always fell asleep shortly after leaving Hanoi so I didn’t see all the sights. When we got there, we boarded about a 50 ft. day-cruiser and headed out. The boat was large and very nice, two decks one enclosed for eating and one on top for seeing the sights. There was something so special to be on this large boat with only nine other people, that made the visit even better. The whole cruise took about 3 hours, we made our way out to a cave and took a hike through it, then we found a sheltered area and had lunch. It was about an eight-course meal which included, squid, prawns, spring rolls, fruit, and some other things that I can’t remember right now. After lunch we went deeper in the islands and found a more sheltered area where we could swim. I say “we” but I should say, “some of the people on the tour” because I feel very self-conscious being half naked in front of people… Don’t ask me why, I just do. So some of the guys went swimming. After the swim the boat headed back to the dock. 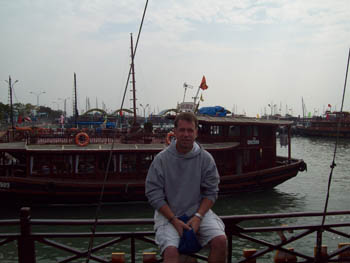 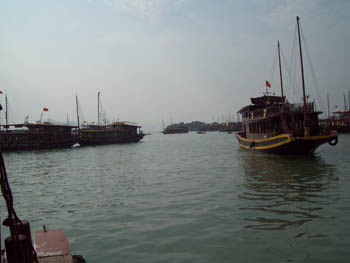 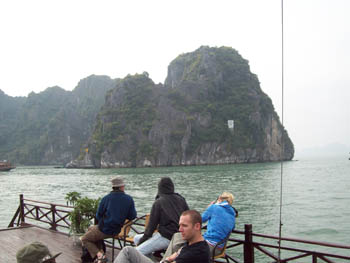 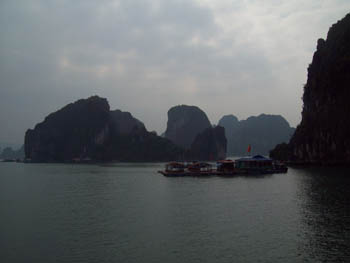 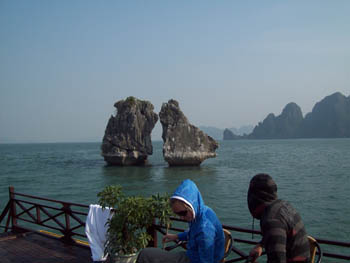 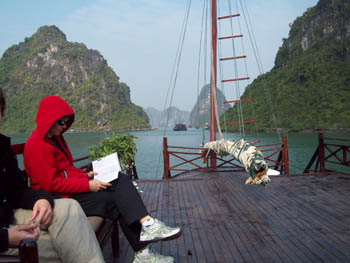 It took us about three hours to get back to the hotel, and like always, I slept part of the way. I was awake though to see a dog running all out down the street. I mean this dog was yelping and running as fast as it could, occasionally looking back. It was a strange sight to see, and it didn’t quite make sense until I saw some people carrying a guy to the sidewalk. He was obviously dazed and confused, and then it made sense, the dog must have been hit by the guy and his motorcycle. For some reason it seems funny now looking back. 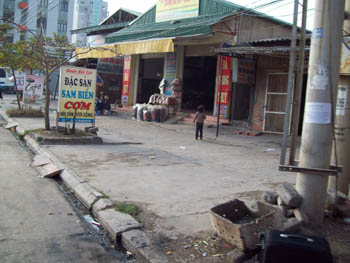 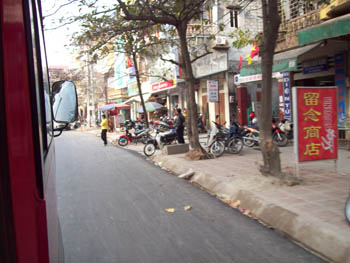 That night was the last night of the tour so there was kind of a solemn air to the evening, our last dinner together as a group. We had dinner and headed to a bar that overlooks the city. After that, I headed back to the hotel with some of the other group, while others were going to go drinking. I wanted to go drinking, but decided against it for personal reasons.