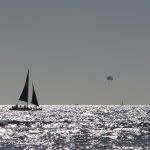 [Updated]I hope this post doesn’t come off as too negative. I’m trying my best to be as open and as objective about what’s going on at the moment, but I kind of feel as if I’m being too negative. That being said, I’m sitting in the airport in Honolulu waiting for my flight in a couple of hours. It’s early and I can tell today has the chance to work out okay or it could possibly fall apart and there won’t be anything I can do to stop it. I’ll explain further down. I’m flying Southwest and I’m nervous about the flight too, mostly about where I’ll get to sit.

I’ve been trying to get everything in order before I arrive in Portland later today and besides my attempts it seems that this trip will be a waste of time and money. I initially thought that I’d stay in Portland with family until I head to NM early next week. Unfortunately, I couldn’t get a hold of anyone, and there just didn’t seem to be any reason for me to stay in Portland if I wasn’t going to be spending time with family. I decided to book my flight to Dallas earlier than I expected it’s on the 11th. I did receive an email from a family member afterwards. [Update: I have been in communication with a family member, and we’re planning on meeting up tomorrow… so that worked out]

I also booked a place in Portland for two nights. I told them that I would be arriving late, about midnight. They replied with, “Don’t expect to show up and have someone be here, the office closes at 2200.” I also had me arriving on the 10th, so they told me to change my reservation and let them know when I will be arriving. So I did that. I changed my reservation and sent them an email requesting a late check in. Their response was that I needed to call them and let them know that I’ll be checking in late. I responded with, I will be traveling all day so I would like to request now. They replied with please call us to let us know if you’ll be checking in late. I replied back, “As I mentioned, I’ll be traveling all day, and I don’t have a phone, so I can’t call you. Please use this email as my request at a late check in.” Now I’m waiting for confirmation on a late check in. So I’m kind of stressing on whether they’ll just ignore me and I’ll show up to a locked door. I just don’t understand why they are making it so difficult… I haven’t faltered once on whether I’ll be there or what time I’ll arrive. My guess is that no one wants to wait around until midnight for me to arrive, and maybe they hope if they are difficult enough I’ll just give up. [Update: Just got an email from them giving me the information I need for late check in. So I’m good to go on that.]

I mentioned that I’m flying Southwest. This is the first time I’ve ever flown with them and to be honest I always told myself that I wouldn’t ever book with them. I had heard some kind of bad stuff, lots of good stuff too, but the bad stuff like legroom kept me from wanting to fly with them. When I booked the flight the price was pretty good so I decided to give them a try. I found out at check in that it’s open seating. I’ve never experienced that before, but I guess once you get on board you pick the seat that you want. No assigned seats. That just scares me. The very real possibility of being forced into a middle seat between two people for a prolonged amount of time gives me some serious anxiety. [Update: I have just landed in Oakland, and I got to say that my flight here was one of the best I’ve had in recent times. Way to go, Southwest!]

So now I’m sitting on the floor of the Oakland airport waiting for my flight in about 3 hours. I say 3 hours, but they keep pushing the time back, it was 945, then 955, then 10, now it’s 1015. I hope that it isn’t delayed any more than that. This flight is with Southwest too. I’m curious if my other flight from Honolulu was an anomaly, or all of SW’s flights are that good. The delay isn’t giving me too much confidence though. :)

It is so strange being back in the US, you know, the actual US. Hawaii is the US but it’s so touristy where I was at, that it still kind of felt like I was more of a tourist than anything. Here I’m just a regular guy just hanging out in the airport waiting for my flight. Anyway, I digress. it is strange to be back. For the most part there doesn’t feel like anything has changed, but also that quite a bit has. I don’t know what other way than that to describe it. I think the base American caricature [I chose that word because there is a stereotype of what an American is] is still the same, but the things around them are different. The people are still as friendly as I remember them, they will jump into a conversation with anyone at the slightest opportunity. It’s so strange, but also so endearing. On the other side I haven’t seen a restaurant that I recognize in the airport. Not one. If I was on the east coast I just say it was a regional thing, but I am kind of close, relatively speaking, to Portland, you’d think I recognize some business. Even if it’s a coffee shop, burger place, convenience store, something, but so far nothing yet.

I was only scheduled to be in Hawaii for three days and I leave for the mainland tomorrow morning. I’ve got to admit I haven’t been doing the tourist-thing very well. I’m not sure why, maybe it’s the time difference that my body is trying to deal with, or maybe it’s the idea that I never intended for this to be a vacation, more of just a long layover. Whatever the reason, I have been very boring since I got here.

A strange thing happened to me yesterday, sorry, that sounds a little dramatic, maybe the best way to say it is just that I ended up sleeping for over 15 hours. I couldn’t believe it when I looked at my phone. 15 hours! I’m sure at some point in my life I’ve slept like that, but I can’t remember when. I was talking to one of the other guest here and he said it’s because of the time difference, basically it was jetlag. I don’t know though, seems a little bit weird to me.

Anyway, after waking up about 2pm I decided that I needed to do something so I headed out to try to find some food. I ended up walking to beach and walked by a Walmart. Oh, I like Walmarts. There is something that just feels right when I walk though the doors, like I’ve got permission to buy anything I want. Somewhere along through life I just decided to trust Walmart to have the best prices so I rarely shop when I’m there, I buy. :)

My flight leaves Honolulu tomorrow morning at 9, so I’ve scheduled my taxi for 6. I know it’s early but I would rather be waiting at the airport than cutting it too close and stressing all the way to the airport.

I’ve also booked a room at a hostel in Portland. It’s strange but I can’t seem to get a hold of anyone in my family. I don’t know what’s going on if I’ve done something wrong, or they aren’t home to take a call, or something else. I guess when you haven’t seen someone for over 6 years, there just isn’t a loss when you don’t see them for longer. It’s just strange though… I need to fly to TX so I’ll have maybe two days, maybe 1 (since I can’t seem to contact my family) to see how the city has changed.

So I got in about 11:30 this morning and everything went really well. I got through passport control and did all the usual things really quickly. The only drawback was that I was forced to use a taxi instead of some other relatively cheaper method of getting into the city. It kind of sucked having to pay $40 to go 9 miles but I didn’t have any other way.

I still don’t have any clue how the hours worked out though. I left Osaka at 11:30 pm and the pilot said that it was a 6 hour flight, but I got there 12 hours later plus 24 hours earlier. So I don’t know if I got 2 hours of sleep or 10 hours of sleep. I guess it doesn’t matter, but I felt like I slept about 3 or 4 hours total.

I took off from the hostel at about 2 this afternoon for a walk. I kind of wanted to go to the beach, but I wasn’t set on it. I think Diamond Head has always been cool to me so it was my plan to go in that direction. So I started walking. I’m not sure how far I walked, but probably less than 10 miles, but long enough for my legs to be tired. I ended up getting to the beach after wandering for a bit.

Back when I was here as a teenager, when my Mom took me, I remember not being too impressed with the beaches. I can confirm, I’m still not that impressed. Don’t get me wrong the beaches I saw today were okay, they just aren’t in the same league as some of the ones I seen in other places. There just isn’t enough beach. There’s only about 25 to 30 feet of sand before the water. Maybe it was high tide though.

When I got there the sun was headed down and I got some great views of a some sailboats in silhouette. Lots of people were there and everyone seemed to be having a lot of fun.