It has been one of those days where I spend most of my time trying to find something to do before my bus leaves. In Istanbul I camped in the bus station, in Macedonia I walked all over the city, and in Inverness I walked in circles. It may seem like I’m trying to be funny, but that’s what I’ve been doing for the last six hours. I did find some stuff to do like going to a gallery and a museum, so it wasn’t like I was completely bored, but most of the day I just wandered this tiny city over and over and over again. I’m totally wandered out now and I still have three hours before my bus leaves. Even though I haven’t really done anything notable today, it wasn’t a bad time at all. I looked for things to take pictures of that I hadn’t yet, had a great lunch, went to a museum as I mentioned, and did a lot of souvenir shopping, though I only bought a couple of things. Well, I got back to the hostel and watched an old movie. I was kind of burned out from freezing on Loch Ness and add the big lunch and pint of beer and I really didn’t have a lot of energy to do anything else. I did manage to update my blog with both entries and images so that was productive at least. It did also give me the time to recharge and head out again. Since I didn’t have anything else to do I thought I’d take the time to look for some souvenirs. I wandered the streets for about a half hour and as I got close to the hostel there was a bagpipe marching band kind of forming. So I ran up to my room to get my camera and made it back to see the band start. It seems that many people don’t like bagpipes and I could never figure out why. To me they sound kind of mysterious and I love listening to them when I get a chance. I don’t think that I’d ever download bagpipe music for my mp3 player, but I do like it. 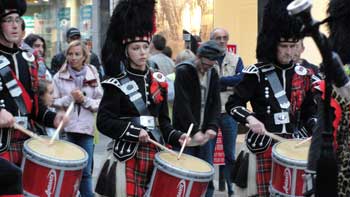 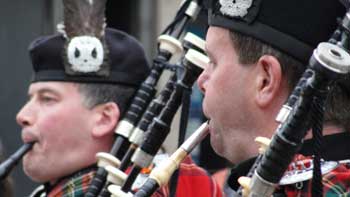 The band marched for about a block and then formed a circle and played for about an hour. I must have taken about 100 pictures. To be honest this town is really lacking in things to do, so when something like this happens “it’s an event.” 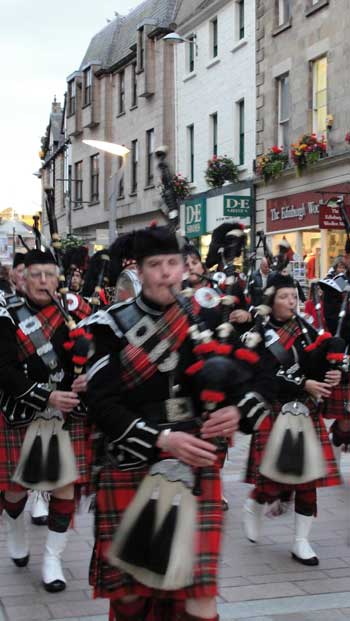 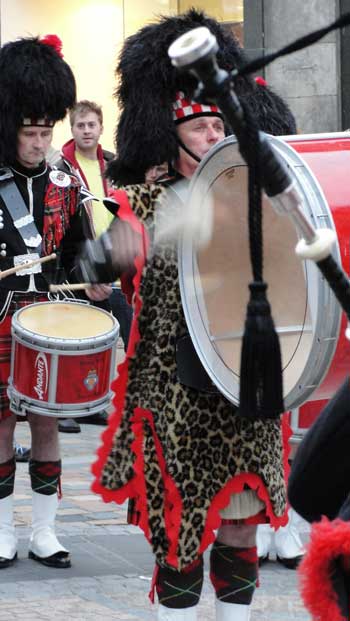 After the band finished I walked up to one of the players and thanked him. He asked me where I was from and I told him Dubai. For about 10 minutes he told me stories about when he was in the Royal Paratroopers stationed in Dubai, before it was actually Dubai. Most of the stories he told were interesting, but a few of them to be honest I didn’t understand at all. For me all that matters is that I met someone new and had some fun. Did I mention that the people in Scotland are really friendly? 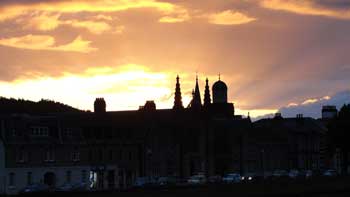 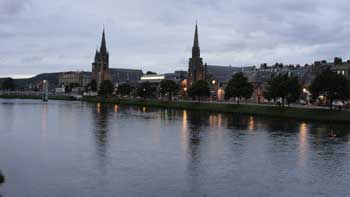 The above entry was written last night and uploaded to the blog the next morning. As I sit here I’m trying to figure out what I should do today. My bus leaves for London at about seven tonight and it’s now nine in the morning. I’ve got to check out of the hostel so I can’t really hang around here. What to do? What to do?

Today I took a three-hour cruise on Loch Ness and I’m sorry to report that I didn’t spot Nessie. I looked around quite a bit hoping to get a quick view of the mysterious creature, but I guess my three hours wasn’t quite long enough to actually see her. My cruise left the dock at about ten this morning and slowly made the way up the River Ness. The morning was cold and wet, clouds covered the tops of the surrounding hills, and a strong breeze made the falling mist seem almost like rain. We passed moored boats and people fishing on the banks, and eventually came across the locks that would raise the boat to the height of the loch. As we entered Loch Ness the weather was starting to clear up, though the wind and cold persisted. We chugged along for about an hour until reaching a well known castle (I can’t remember the name of it) and our boat stopped to let some people off and to allow others on for the trip back to Inverness. 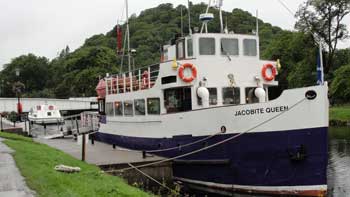 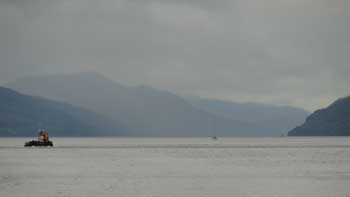 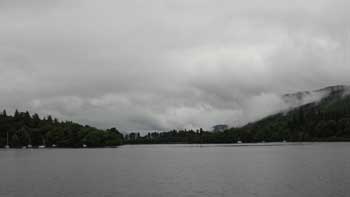 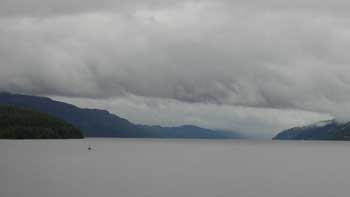 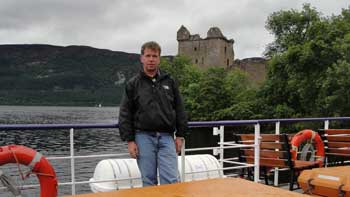 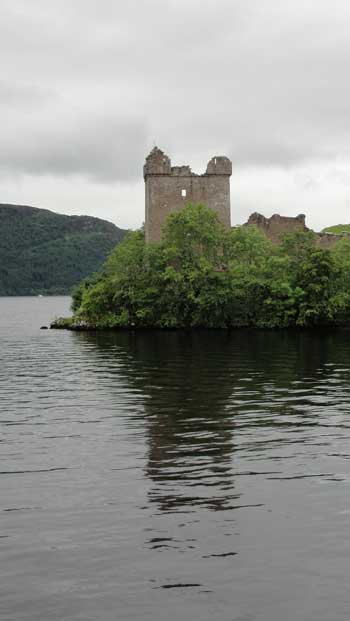 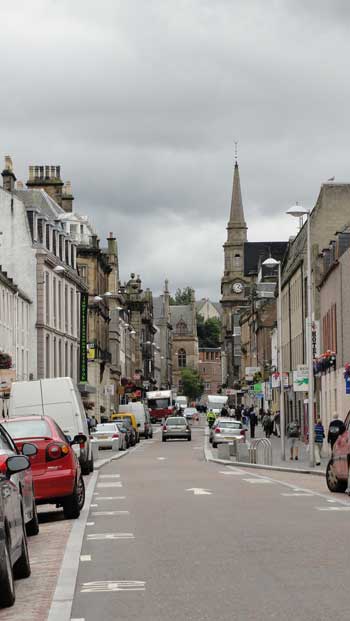 Well, to sum up my thoughts on the cruise was more interesting in that I was thinking about the Loch Ness Monster, and not really thinking about the scenery. Don’t misunderstand me, I wasn’t really trying to spot the monster but knowing the legend kind of made it more fun for me—much like when I went to Dracula’s Castle last year. It’s all about having an imagination to make an otherwise kind of boring trip through a river and lake more like an adventure where something great could happen. When we docked and got back to Inverness I was “chilled to the bone” and decided to find some place warm to rest. I ended up in a Scottish pub with soup, fish and chips, and a beer… is that the perfect choice after taking a cruise through Loch Ness? I think so too.

I’m back in the hostel and trying to decide whether I should head out again. The city really doesn’t have a lot to do, it’s a nice city but just not really that fun or interesting. Tomorrow I leave for London at about seven at night and get there at seven in the morning, so twelve long hours in a bus. I’m looking forward to getting someplace that’s warm though, so in about two days I’ll be in Texas and hopefully warm.

I got to Inverness, Scotland at about 4:30 this afternoon. The bus ride here was pretty good, mainly because I didn’t have anyone sitting next to me. I always mention it, but it really makes a trip more relaxing when you don’t have to be squashed up in a seat and jockeying for a small portion of the armrest. So that being said it was a good trip. 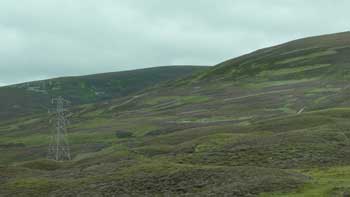 I found out that Inverness is in the Highlands of Scotland…which I didn’t know until today. I also found out that Inverness is right next to Loch Ness. When I say right next to, I mean on the map it looks like it’s sitting on it. If you read an earlier post I mentioned that was a little bummed out that I wasn’t going to see Loch Ness because of the timing and that the tour company didn’t give refunds. By coming here and booking a tour of Loch Ness instead of taking the tour from Edinburgh it looks like I’ve saved about half the cost, and I get to see another city too. 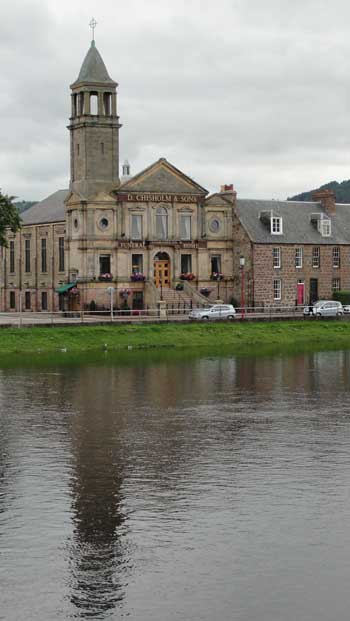 Today after arriving here I took off for a walk around the city. I can’t really say that this city is very picturesque, but it is a nice place. It’s got a small square and the people don’t seem to rush around at all. The Scottish people are really friendly too, I don’t know why exactly, but it constantly surprises me on how kind people can be. Maybe it just shows how rude people are in Dubai and the US.

There is this huge mountain/hill that kind of overlooks Edinburgh that seemed to be calling my name to climb it. It’s not huge, but it’s pretty big and by the time that I made it to the base of it, I was seriously wondering if I was going to be able to make it to the top. The only thing that convinced me to actually try it was that there were other people making the trek up, some of these people were old too (whatever “old” means). 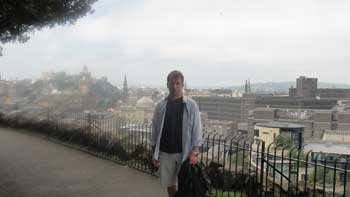 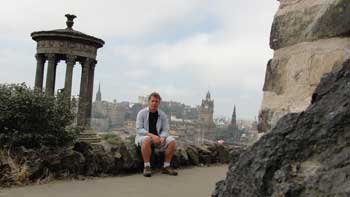 It was not as hard of a climb as I thought it was going to be, in all it took me about two hours, or maybe an hour and a half of climbing, but that includes climbing another mountain/hill right next to the first one. The view was pretty good, the positioning of the mountain isn’t the best to get great shots of the main area of the city, but being up so high I still got some great views and some pretty good pictures. You have to kind of imagine the first hill, actually I’ll put up a photo so you don’t have to, but it’s almost like a big slab of rock that has been pushed out of the ground. One side is nothing more than a cliff of rock and the other is angled down to the ground. The top of this “slab” is covered in grass that has footpaths worn into it. So I’m making my way up to the top wading through some of the tall grass and in the distance I hear bagpipes playing. I don’t think I could have asked for anything more perfect. It seemed to me to be something straight out of a movie. It could only have been better if I was walking beside an ox that was pulling a cart loaded with hay… 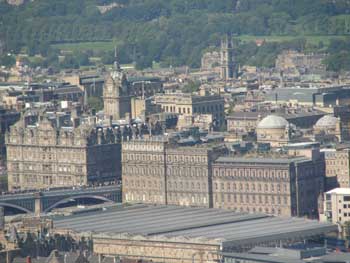 Most of the rest of the day I did what I’ve been doing the other days, walking around, watching shows, taking pictures, and just enjoying the whole experience. And this festival really has been an “experience” from almost every standpoint. It’s been so fun that for the most part the crowds haven’t bothered me too much. 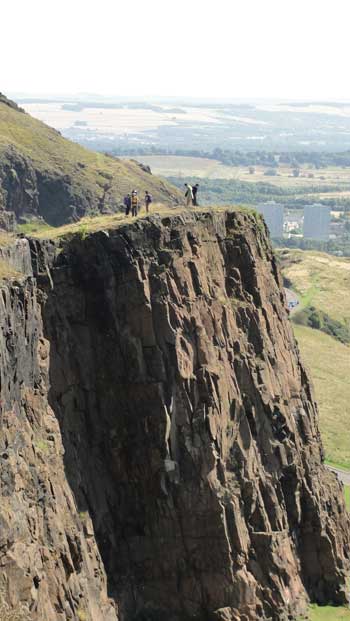 Tomorrow at 11 I leave for Inverness, Scotland and will be there for two nights. I’m looking forward to seeing another city, and from what I’ve heard Inverness is really pretty. We’ll see.

So give me a pat on the head because I was actually responsible today. I managed to plan and arrange the remainder of my time here in Europe in advance. I have never planned further than how long I was going to stay in one place so this is really a unique event. Today I got my bus ticket for Monday to Inverness, where I’ll stay for two nights(booked the hostel too). Then I bought my bus ticket back to London (booked the hostel too) on the 19th where I’ll stay for one day and night and then head to the US on the 20th for five days. I’ve rented a car for five days when I arrive at Amarillo at night. Then in two days I meet up with my brother in Clovis, NM. I haven’t seen him for six years so it will be something to see him.

Oh yeah, it looks like I’m not going to be able to see two of the things that I really wanted to see, Loch Ness and Stone Henge. I thought that I’d make it to both, but gave up on Stone Henge when I was in London, and just today realized that I wouldn’t be able to make it to Loch Ness. You have to pre-buy the tickets to Loch Ness and the bus leaves at 7:30. I probably could make it on time, but if I don’t they won’t refund the price of the ticket, and it costs about $125. It’s too much to gamble on for me.

Great Britain has been great and I feel like I’ve only scratched the surface of the things that I wanted to do, I still want to rent a car and just drive the country in any direction that interests me. That would include Ireland, Scotland, and of course England. So with any luck I’ll get a chance next year or maybe later.