So my 36 hours in Sofia, Bulagria is pretty much over, and I can’t really say that I’m sad about heading to my next destination. It rained the first day I was there, and despite of that Sofia was nice, it had a lot of interesting architecture and in a lot of ways was similar to Irkusk, Russia (still one of my favorites). The major difference being that I really didn’t have the same feeling as I did when I was exploring Sofia as I did exploring Irkukst (and I still can’t spell that city either). In Irkustk, I was overwhelmed with the feeling of the Soviet Union which allowed me to get a feeling of what it must have been like during the Cold War. In Sofia I got a little of that, but in general the people don’t seem to be a happy bunch. I wasn’t in the city more than twenty minutes when I thought a friendly station attendant offered to give me directions, which soon ended in him asking me for money. Not ten minutes later I asked a tram attendant what tram I should take, and she said something in Bulgarian, I said I don’t understand, she said the same word again only a little bit louder. I replied with a sheepish grin and said I speak English, so she said the same word only this time louder. The process continued until she was yelling at me the same word and I was feeling like an idiot. She finally wrote a “9” on a piece of paper and gave it to me. :) 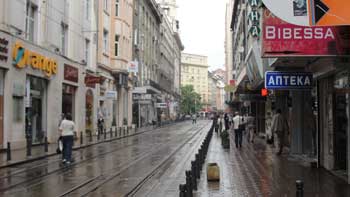 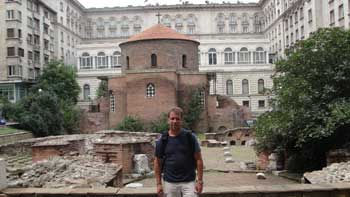 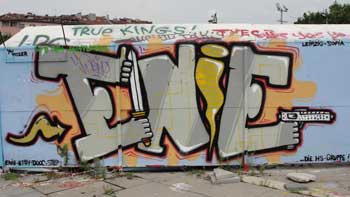 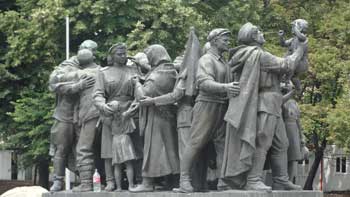 What’s kind of funny while I was writing that last paragraph two security guards came up to me, there was one good one and one bad one. The bad guard yanked my electric cord out of the wall and threw it towards me, the good guard said that it was not permitted. The bad guard was really angry though so angry that the nicer one pulled him by the shoulder to get him away, then he came back about 5 minutes later and asked me to move. I guess sitting on the floor is not allowed here, I’ve only done it in about every airport, every bus station over the world but it’s not allowed here. Like I was saying the people don’t seem to be a very happy group. Back to my examples, then I was asking for directions and an old man told me that I was rude to not speak Bulgarian. He said that he learned English and if I come to his country it was my responsibility to learn the language. I couldn’t argue with him, but there was a younger guy that did. He said that there was no need to learn it. So they argued and I sulked off. Believe it or not I have about three other examples that I won’t bore you with, just suffice to say they just didn’t seem to like me much. 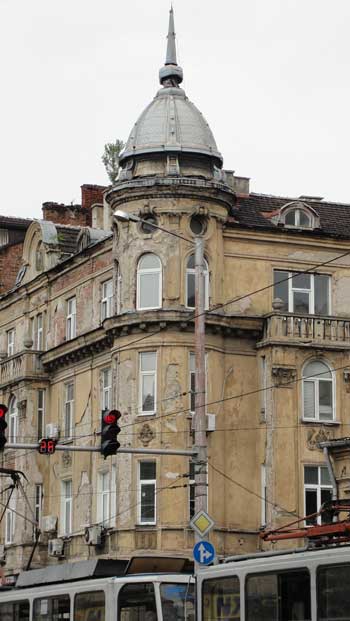 I spent much of my time just walking around and taking some pictures. My last day here was a day that I walked around until I was so tired that I didn’t feel like walking anymore and then went to the bus station to wait for my trip to Macedonia, and right now it’s eight-thirty so I still have three hours to kill and my battery is about to quit, I’ve got finish later.

This is my last night in Varna and to be honest I’m a little bit mixed on my time here. The hostel and the people staying here are great and it has been fun in that regard, but the city itself didn’t do much for me. I guess it’s probably because there wasn’t a lot to take pictures of, in other words, I didn’t see too much that was that interesting… besides the women that is, but I don’t think it would go over too well if I went through the city taking pictures of all the pretty women. The city is pretty in the tourist parts, and it was fun just walking around, but nothing really to do if you’re not into shopping. 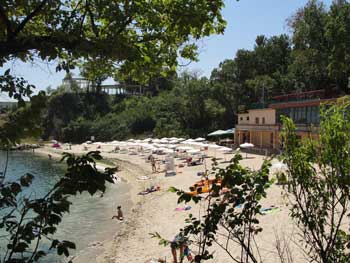 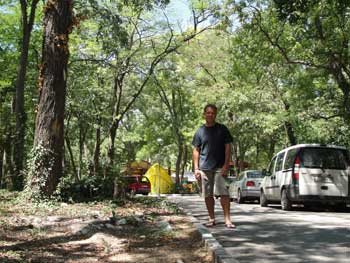 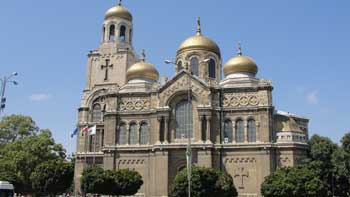 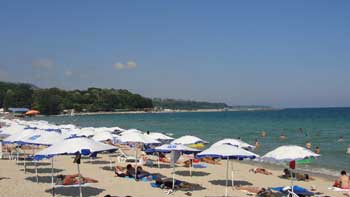 Tomorrow I head to Sophia for one night and then I’m back to not knowing for sure where I’ll be.

Today was pretty much a recovery day, recovery from what I’m not sure, except I used the day to pretty much hang out. I went down to the resort area and looked for place to take some pics, but to be honest, it’s pretty there but not really that much to take photos of. Later on I headed to the bus station to plan out my exit from here. I think I’m going to go to Sophia next. The decision I have to make is whether I leave tomorrow or the next day. My mind is telling me to leave tomorrow to stay on schedule, but my heart is saying stay here one more night. It’s really relaxing here, there’s the beach, the weather is nice, and there are people that speak English, that in of itself is saying a lot. You never really appreciate how nice it is to be able to hold a conversation, or just communicate at the basic level until you are somewhere where the smallest thing, like finding out how much a bus ride is, or asking the time is nothing less than impossible. So anyway I went to the bus station and found out what I needed to know and headed to the city center. Right across the street from the city center is a large church, it’s very beautiful so I take a picture of it and head into the center area. Well, this area is created based on like a star, all the streets go diagonally toward a fountain or statue, then it starts over again to another star shape. It was getting dark so after walking around a bit I decided to head back, and that’s when it got kind of funny, I knew the general direction of where I needed to go so I headed that way. The problem came up when I realized I didn’t have a clue on where I was, I knew where I wanted to go, but I’d been walking diagonally for about a half hour and was nowhere near where I started. Fortunately, I had the picture of the church in the camera and started asking some people where it was…”Excuse me. Ummm.. do you know where this church is?” Blank stare. I wave my hands above me and say, “This church is around here somewhere, do you know where it’s at?” Blank stare. Remember this church is huge and beautiful, it would be like asking an Indian where is the Taj Mahal, at least from my perspective. Finally I ask a guy who’s walking his dog, and he points down the street, so I head that direction and in a short time I was there. The communication thing is fun sometimes, but other times it’s a little stressful.

Well, I’ve made it to Varna, Bulgaria. I got in yesterday at about 7 in the morning after my twenty hour bus rides. The first leg of the trip was from Kusdasi to Istanbul about ten hours. I still think that taking a bus is the best way to travel and the trip to Istanbul confirmed that, even though I did struggle for my own space with the guy sitting next to me. The bus makes regular stops which allows a person to stretch and kind of recharge your battery a little bit before another leg starts again. Anyway I kind of got off subject, mainly because it was just a normal bus ride with some of the good things, and some of the bad and there’s no reason to bore you with the details. Same goes with the second leg of the trip, except there was some difference in that we had to cross the border from Turkey to Bulgaria. We got to the border at about midnight and the whole process ended up taking about 3.5 hours. I got into Varna Sunday morning at about 645 and spent the next 3 hours looking for the hostel. The major problem was that there really wasn’t a lot of people that I could ask for directions, and the driver dropped me off in the city and not at the bus station. I had directions from the bus station, but since I didn’t know where the bus station was I was disoriented in which way to go. Needless to say I found it, and it has been a great time so far. The first thing that I did was head to the beach… oh, yeah, the hostel didn’t have a room for me, actually it was a reservation glitch, when I got here they thought that I was there to camp, and I thought that I reserved a room. We were both right because I went back and double-checked. The website says 1 bedroom, shared bathroom, but the reservation confirmation said that I reserved a tent… so, now I’m camping, which has been great.

Back to my story, the first thing that I did was head to the beach, it was very crowded, but the water was warm, lots of pretty women to look at, and generally I couldn’t have asked for a better time, even though I only there for about an hour or so.

Later in the day I went for dinner with another guest of the hostel and then we walked around the open-air market before heading back to the hostel. On our way back we picked up some beer, of course. :)

There was a couple already drinking when we got back, and the four of us ended up hanging out until about 230 in the morning just talking about the nuances between our countries. The couple was from Australia, Carl (the guy I was hanging out with) is from England, and me from America… it was fun except they all have strange accents. :)

After I finish this entry I think I’m going to go wander a little bit, maybe take some pictures and stuff, though the thought of actually getting moving seems like a lot of work right now.