Last night I went and had a beer with one of the guys at the hostel. He was roughly my age and from Germany. I’m really quite surprised on the amount of Germans that I’ve been seeing since I started my vacation. The same could be said for the number of Americans as well; we’re everywhere. The room had three Aussies, one American, and one German. Two of the Aussies were girls in their twenties, and the other was a guy in his twenties. They went out together and the two older guys went out together… sucks to be old(er).

So now I’m sitting on my train and second-guessing myself if I’m actually on the right train. I asked a conductor, or a someone affiliated with the train, and he agreed that it was the right train, so I guess I’m good. The problem is, is my first train was late to the station, so I had about three minutes to get to this one, and it seems when I rush, I make mistakes… It’s 1115 as I write this, and I should be in Genoa about 1330, unless I’m on the wrong train and who knows where I’ll actually end up, though there is a side of me that kind of likes the idea of no knowing where I’ll end up. ☺

So what to say, I got into Nice about 330, about an hour late, and found my hostel shortly afterwards. So far the bad reviews of this place don’t seem really accurate, but time may prove me wrong. Nice is nice… I’ve been wanting to say that since I knew that I’d be coming here. It really is nice though. It’s not an easy thing to quantify though. There are some things that I really don’t like, and there doesn’t seem to be that much to take photos of (yet) but there is something about this place that is nice. It could be the beach with the massive amounts of people, the blue water, and everyone seemingly having fun. Maybe it’s the layout of the city that is working, there is a main street that goes on for quite a ways, maybe a mile or so, that has been closed off to cars so there are people everywhere. When I think about it, it’s the beach. 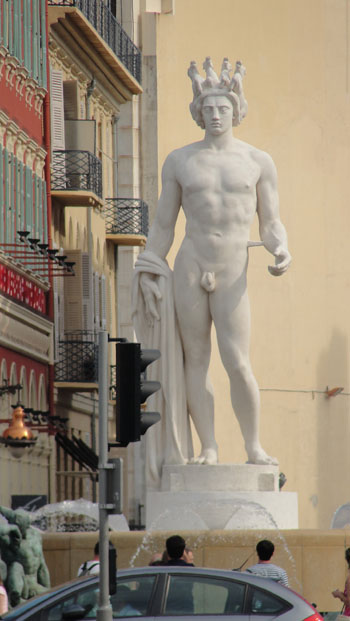 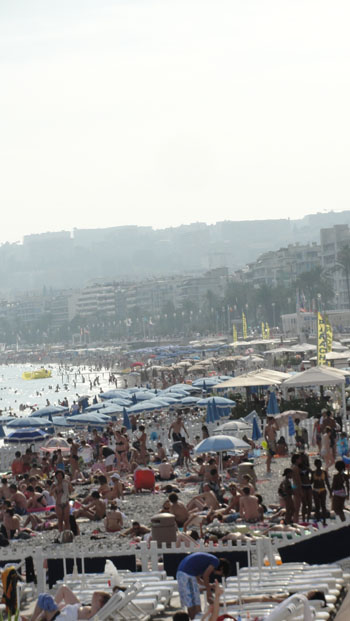 The beach is not the kind of beach that you probably think about when you think of a great beach, it doesn’t have sand, it’s got rocks. It only is about 30 meters from the wall, so people are packed in like sardines. It still looked like everyone was having fun though. I kind of wished that I had gone down to the water and at least waded in. Another thing that kind of startled me was that it was a topless beach, that’s startled in a good way. 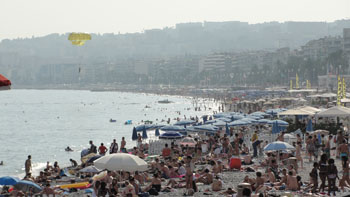 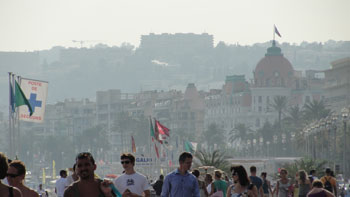 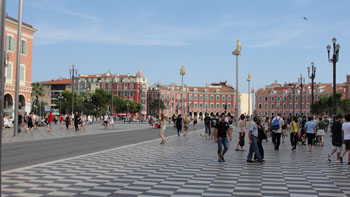 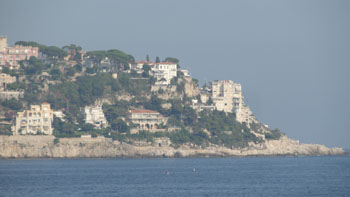 I walked around after checking out the beach and eventually ended up at McDonalds for dinner, and before you think how pathetic I am to be eating there while I’m in the French Riviera, there were lots of other people doing the same thing.

It’s about 10pm and I’m through for the day. I had some thoughts about going out tonight for a beer, but at about 8 I stretched out and now I don’t think I’ll do anything more. Besides I have a train to catch tomorrow for Nice, France. I’m staying in Nice for two nights in a hostel that sounds like it is awful. Unfortunately the way I travel I wait until the last minute to book a room and the only place available sounds pretty bad. No worries. I’ve got two possible plans while I’m in Nice, the first is to use one of the days to go to Monaco. I’d like to see the city-state at least to say that I’ve been there, and who knows, maybe go to Monte Carlo for a high stakes afternoon. The second is on my way to Italy, I’ll stop in Monaco for a day and then continue on to either Genova or Pisa.

I’ll then hang around Italy for a couple of weeks and then take a ferry to Greece. I’ll spend about week there before flying back to Dubai from Athens. That’s the plan at least.

I got into Marseille, France yesterday at about 5 pm. The bus ride was boring, but good. I had enough room and except for the smell of the chemicals of the bathroom that was right behind me, the ride was good. I like when that happens.

What to say about this city? I can start by saying that I like it. It seems to be a lot smaller than Barcelona, there are less people, and for the most part I don’t think that I can complain at all. My hotel was only about 5 minutes walk from the bus station, that’s another good thing. The city is very picturesque too. My hotel is on the side of a hill, so going to the water is a downhill walk, and the walk is on the main tourist road. It kind of surprised me on the amount of Arabs here. There is a souk here, although smaller, it is just like one that you would expect to see in Dubai, Amman, or Casablanca. It’s also even more expensive here than Barcelona (and Barcelona was more expensive than Sevilla). I keep trying to understand why it’s so expensive? Is the added cost for items due to taxes or is it because it’s a tourist spot? Barcelona is a tourist location, and it’s cheaper than here. When I think about it, the further East I go, the more expensive it becomes. Maybe it is a latitude tax, or would that be longitude? ☺ 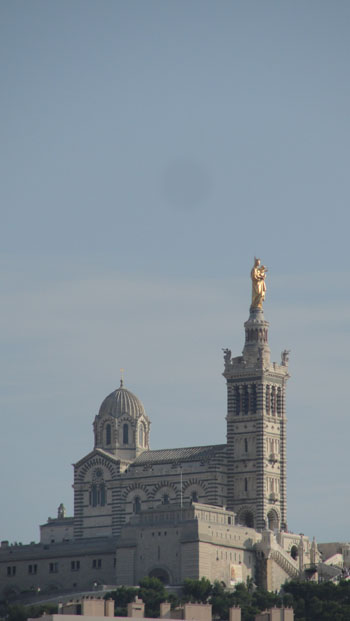 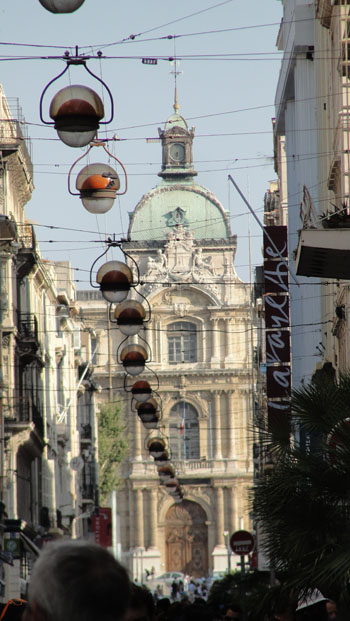 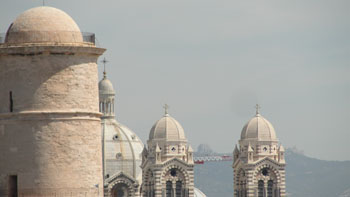 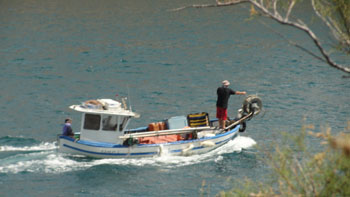 Last night I walked around a little, took some photos, but I didn’t really stray too far from the main road that I mentioned above. I got back to the hotel about 9 and was too tired to go out again. 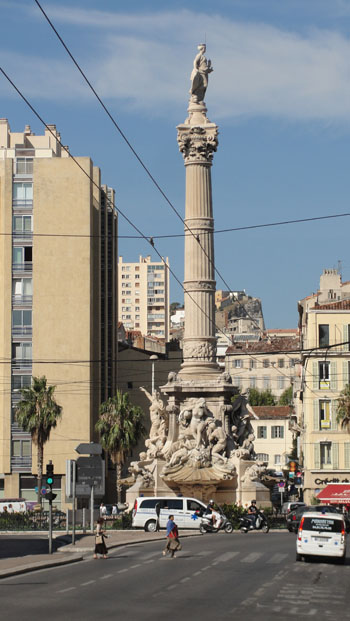 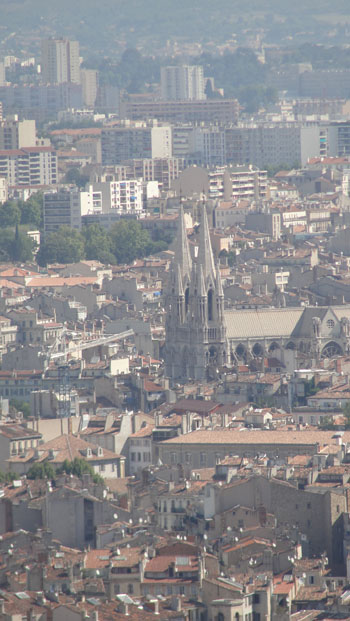 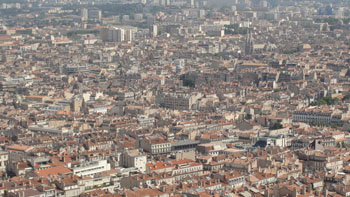 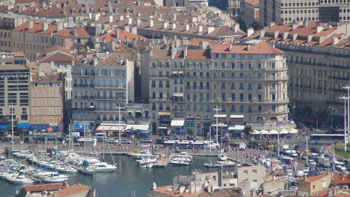 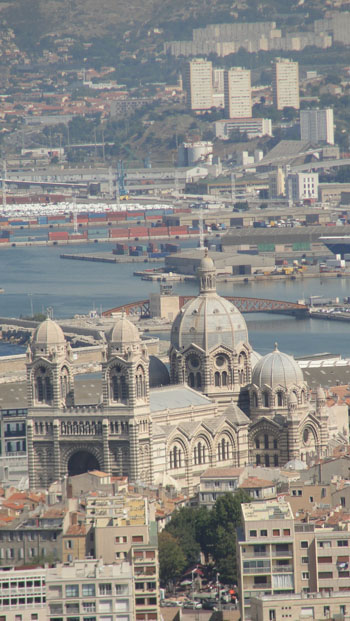 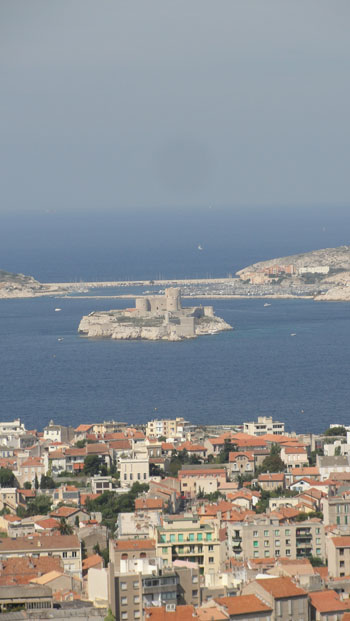 This morning I headed out to see a church that was on top of a hill overlooking the city. The church is really pretty and you can see it from everywhere in the city, or should I say everywhere I’ve gone in the city. Like always I never consider taking a bus or finding any other mode of travel other than walking so I took the long walk to the summit in stride. It took me at least an hour to get there, and when I arrived I was soaked in sweat. It was a little bit embarrassing being around the other tourists with a drenched shirt, but what can you do? They should be the ones that are embarrassed for driving up to the top. The view was really beautiful and I took lots of photos of the vista. The rest of the day was making my way back to the hotel, stopping at a park to eat some fruit that I bought. I did make it to the water, but didn’t get in. It’s not a beach, in fact I haven’t seen a beach, but there were rocks that a person could swim from. I saw lots of people fishing or just sitting and watching the boats go by. 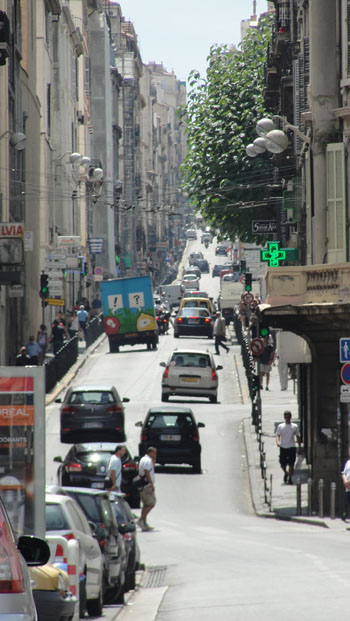 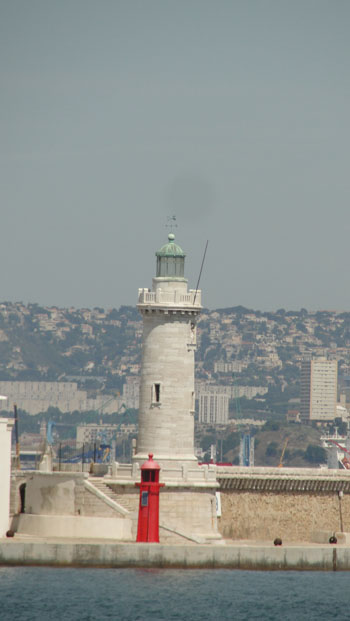 It’s early afternoon right now, so I’ll be heading out again in about an hour or so. Maybe I’ll get some more photos.

Okay, so I went and bought a camera before I went scuba diving. I felt that I just needed one since my other one stopped working. The card that had the images on it are fine and now I can upload them. The only problem is the quality of the photos that my video camera took… I can’t complain though, I’ve got the photos and that’s what matters… right?

Okay, I’m up and sitting at the laundry watching my clothes wash… one of life’s little pleasures. The clothes in my backpack stunk so bad that I decided to wash everything. J

While I have the time I think I’ll write down my feelings about Paris. This morning I was rereading my journal and was surprised that I didn’t write anything about being there. It could be that I neglected it because I don’t have any pictures to add, or it could be that being there was an accident, or maybe I had other things on my mind… who knows, but I’ll take care of it now.

Paris. I don’t know really have to quantify it. It’s beautiful and seems to have most of what the other cities have, but more of a livability than some of the larger cities like Rome. What I mean by that is there seemed to be the best marriage between old and new, that everyone walks among the city being complimented by the architecture and not overwhelmed with it like many of the smaller, more touristy cities that I’ve visited. Now, I only stayed in the tourist areas so anything that I say is dealing with what I saw. I did see a lot though, I walked for at least 12 hours between the two days I was there and saw all the major sights, less museums, and lots of the lesser known sights.

My camera stopped working somewhere before I got to paris so I don’t have any photos to show on the journal, but my video camera allows me to take photos onto a sdcard, I used the one from my camera, so I have photos, just none to put up until I can get them from the card to my computer. I may go to Wal-mart in a bit to see if I can find a cheap camera before I leave to meet up with Greg. If I can find one that will fit my sdcard I can add the photos in a few days.

The biggest and coolest thing that I was stunned by in Paris was pretty much everything, the Eiffel Tower was remarkable in the day, and at night they light it up to a point that you have to be impressed. The Louvre was huge, it looked bigger than the Hermitage in St. Petersburg. I didn’t go in because I first hate to wait in lines, and second I felt that I wanted to cover as much of Paris as I could before I had to leave. My guess is that in no time I’m going to regret not going through it.

The river Seine is also really romantic, it has the water front walk next to it for most of the city. As you walk along you are surrounded by old walls (mostly) that are constructed out of cobblestone and just above you have old buildings that just add to the ambience of romance.