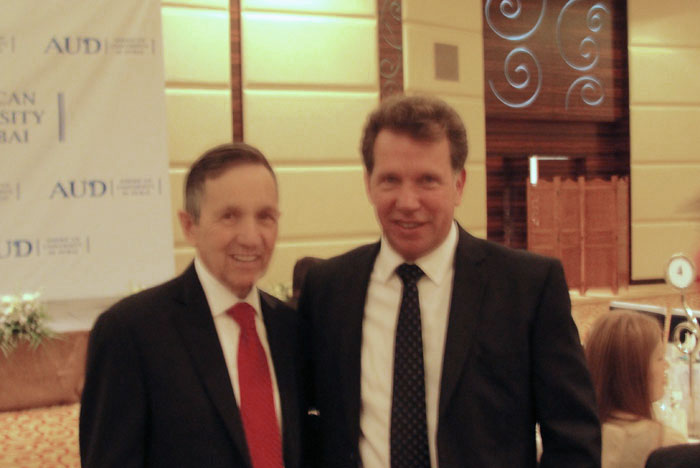 This year’s guest speaker at AUD was Dennis Kuscinich. I’m not really a fan of his politics, but I am a fan of him. There are very few politicians that I believe are in Washington to actually make a difference and he is one of them. The other politician that I’d like to meet is Ron Paul. Both Paul and  Kuscinich are hard working and passionate about their beliefs, so I was excited to meet Dennis the other day.

Sorry about the image quality, but I’m too lazy to try to fix it properly, and my friend only took one picture of me and Dennis, so this image will have to do.

With the upcoming Summer break just around the corner, I’ve got to decide on where my destination will be. I had thought that I was going to stay in Dubai and get caught up on some work, but the closer I get to the break, the more unlikely it is that I’ll stay here for both months. I’ve been going through three possible trips. The first is Morocco to Spain and then Portugal. The second is Southern Africa, and the other is staying in Dubai. Well I think I’ve decided… it will be option 1, about three weeks in Morocco, and then to Spain for a week or two, then head to Portugal before heading either Dubai, or to the US for a week.

Well, my Winter break is coming to an end and this is the first time that I haven’t gone to some far and exotic destination in the last three years. There was a couple of reasons why I decided to take it easy and just hang out in the UAE. The first was that I just purchased a car from a coworker (who was moving to Australia) and the second was that I had expected to have my brother visit me. Though my roughly two weeks away from work was relaxing it wasn’t as exciting as I’ve become accustomed to, there wasn’t any backpacking to the next location, no uncertainty of the next hostel, and no seeing sights that I’ve always wanted to see.

Though I may be painting a somewhat boring picture of the my break, I have to say that it was fun. With the new car and a desire to see some of the UAE I managed to get away from Dubai on a couple of road trips. The first was a trip to Fujerah (sp) and Dibba, both are known for their clear waters and relaxed environment. To be honest, I wasn’t entirely impressed with either. In fact I had more fun driving there than I had when I got there. The second trip was to Musandam, Oman. I went with a friend and his girlfriend for the day. I had a great time and even though we didn’t camp, which we had discussed as a possibility, we took a boat ride to a secluded beach, followed dolphins along the way, and generally had a great outing.

So as I sit here this morning getting ready to get ready for work I realized that it’s been quite a while since I’ve added an entry into my blog. If nothing was going on, then “no big deal” but there have been some somewhat interesting things that have happened in the last few months. so might as well write something.

Probably the biggest “event” recently was that I just got finished teaching a workshop for Adobe Photoshop Elements. If you’re not familiar with Elements, it’s a scaled down version of the regular version of PS. This was the first workshop that I’ve taught and although I haven’t gotten any official feedback yet, I think it went well. The workshop was through a company here in Dubai and it was an all day “event.”

It’s that time of the year again, Summer Break. This year I get an extra two weeks off because of Ramadon falling during the beginning of the Fall semester. The extra time is a mixed blessing, this is the first year that I was thinking that I was going to stay “low-key” on my travels and just do a trip to The States for a week. Now I almost have to take advantage of the time, I mean two months with only a week away would probably drive me crazy. So what to do…what to do?

I did a half-assed check to see if there were any tours to some place that I want to go available, but I don’t really know where I want to go, and I couldn’t find anything interesting. In the back of my mind I was thinking that England would be a good choice, I’ve never been, and it’s a good stop on the way back to the states. So I did a quick search for flights and it’s not really expensive, but it’s not cheap. I did another search for Morocco, one place that I really want to see but haven’t had a chance just yet, the it was expensive, plus I’ve been all over the Middle East and I think that I’d probably not get the most out it. So back to England…

So with the almost finalized decision of going to England, I started to wonder if I’d really get the most out of the summer just heading to one country… probably not. So I kind of decided on flying to Helsinki, Finland and backpacking my way to London.

This is what I’ve come up with so far:

Denmark (don’t know where though)

Germany (berlin, and others)

Now this itinerary is really basic, about the only thing that I’m pretty sure of is that I’ll be going to Europe for about a month. Though even that is subject to change. 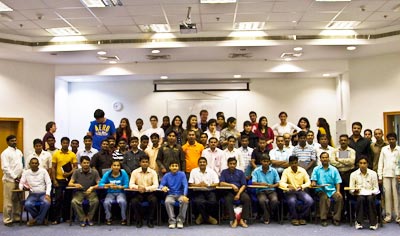 So many of my entries are more about me and less about the world around me. To be honest sometimes this makes complete sense, since the site is about me, but then there are other times when I feel that’s I’m being a little bit narcissistic. That’s why I think I like to write about things that I do to help others. About three weeks ago I started teaching English to some of the workers here from India. These guys are kind of considered by the average person to be poorly treated in many regards.  They live in single rooms with on average five other workers, at what the rest of us call, “labor camps.” I’ve heard many different stories about their pay and circumstances, and it’s not my purpose to make a political comment about their situations, I just want to say that I want to help if I can.