From Macedonia I headed for Albania. You know, it seems strange to me to be writing that I have spent time in Albania. Not for any reason dealing with the country, but more for the reason that I don’t think I ever thought that I would be there, for that matter Macedonia and Montenegro seem the same. Having said that though, I’m glad that I did make my way to visit these countries. My time was great in Albania, if it lacked a lot of things to see it made up for in the culture, the people, and for that matter the other tourists, some of which were more friendly than any other place so far. Just like most of my trips lately the bus to Tirana, Albania was at night and the same thing happened when I arrived. What made this trip more fun is that there were some students that I was sitting next to that were really friendly. They were on a weekend journey and all were part of a…a…I’m not really sure what it was, but it was an international school-sponsored internship or something where they went to Macedonia for seven weeks to work and had weekends to travel around, that’s what they were doing when I met them. Like I said they were friendly and I ended up talking to them for a fair amount of the trip. When we arrived in Tirana I had been asleep for about four hours and was awoken by the bus driver telling me that this was where I needed to get off. The group that I mentioned stayed on the bus, so I was a little confused, but even more groggy from having a matter of seconds to grab my stuff and get off the bus. It was about five in the morning when the bus drove away, and except for a few taxi drivers and a couple of left over people that were on the bus, the town was deserted. There was no bus station, I didn’t have a reservation at a hostel, and all the shops were closed, about the only thing I saw was just a round-a-bout. So I started walking. You ever need something to go your way, you know, you just feel like you need some luck? That’s kind of how I felt walking that morning, the good thing is it seemed like every was going my way, not fifteen minutes later I came up to what was obviously the city center. The large round-a-bout with a huge statue in the middle was the giveaway, and to make matters better, there was an open coffee shop. It could have been so easy for me to take a different street when I started walking and ended up miles from where I needed to be so I really do feel fortunate. I went and had a cappuccino to figure out my next plan, that’s when the students that were in the bus came up. They saw the coffee shop and I guess was thinking the same thing. It turns out that the bus took them to the bus station. After my cappuccino I headed out to find a hostel that I hoped would have room for me. It was a ways away but I found it in about twenty minutes. It wasn’t open so I waited for about an hour before someone came outside to go to a grocery store, they told me that no one was there that worked there so I kept waiting. I waited until about nine in the morning, two and a half hours until the owner showed, and what’s better is that they did have room for me. I dropped off my bags and headed out to do some sightseeing. Like I usually do, I just walk around and take some pics, and I’ll post them soon. The city was very nice, not a lot to see or to take pictures of, but it was a city with some style, for example, the mayor wanted to make the soviet style apartment buildings less dreary so he got people to paint the outside of the building with very colorful patterns. It’s amazing some of the patterns that the people came up with. Another thing about Albania was that they like America. It seems that I saw at least fifty US flags hanging in cars, on flag poles, and just about everywhere else. It’s something that I really like to see, mainly because since Bush America and Americans aren’t really regarded too highly. 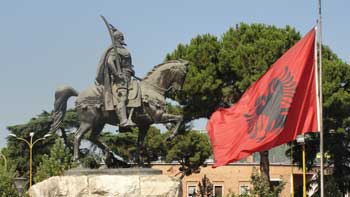 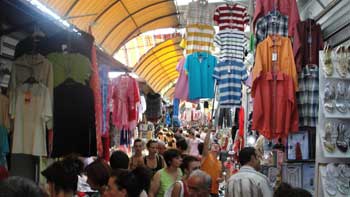 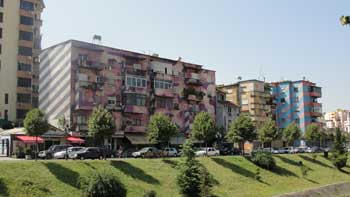 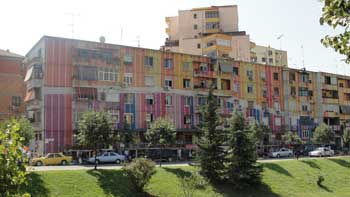 What made the day special is that the people in the hostel were really great, the best that I’ve been around in a long time. In fact it had been so long that I was beginning to wonder if something was wrong with me that I wasn’t meeting those type of people while traveling. After walking around I hung out with the people at the hostel, later that evening we all went out for dinner and drinks. Everyone in the group were great, and even the ones that didn’t go to dinner, and if I wasn’t falling behind on my schedule to reach Kiev I would’ve like to stay longer. 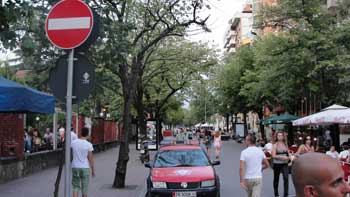 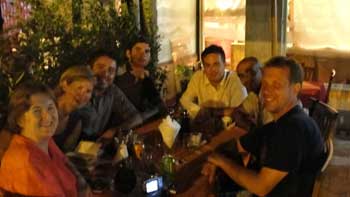