In all honesty I’ve written quite a lot of blog posts, but for whatever reason I don’t post them. In the past few months I’ve lived through a typhoon and have hiked all around Taipei. I’ve spent time going out with people that I’ve met and have struck out on my own just for the exercise. Through it all I took photos and wrote about my experiences but never uploaded them. It’s unfortunate because now it seems like the moment has passed.

So to catch up on what I’m doing since my last post, I’m now in Langkawi, Malaysia. It’s an island near the border between Malaysia and Thailand. I flew into Kuala Lumpur after spending nearly five months in Taiwan. I loved my time in Taiwan, I was really having a great time for the first four months but I kind of hit a wall and stopped going out or doing anything that could be considered fun. So it was time for me to move on… though at the time I had no idea where I should go. Like it has been for nearly a year, Kuala Lumpur was my base to venture out to other places in the region and hopefully other adventures. So I left Taipei less than a week ago for KL. Unfortunately, I got into Kl and was instantly bored and knew that I wasn’t going to last very long, so the goal of finding someplace to visit was on. I honestly didn’t have a clue where to go, just old destinations that I’ve enjoyed or had planned on visiting at some point. Langkawi was one of the latter so I left KL after about five days for where I am now.

Langkawi is really beautiful. It has a very Thai feel to it. The area where I am is basically a city situated on one main road. The road is lined with guest houses, restaurants, and other businesses. The area seems completely dedicated to being a tourist destination, just like most of the islands in Thailand. At least for now though, Langkawi seems to be controlling the ‘over the top’ tourist feel that many of Thailand areas doesn’t seem to.

I think I’m going to stop this post now just so that I upload it.

Yesterday was a good day, and I’m getting the feeling that today might be even just as good. I had some tough days around the weekend, so I really like the idea that things are getting better. I’m not going to go into why things are better, but just the fact that they are, is a great thing.

I’m sitting in Starbucks right now doing the ‘hipster’ thing. I’m sipping a soy latte and writing in my blog. I love the experience and have been doing it at least twice a week since I’ve been here in Johur. What makes that significant is that I have to take a taxi nearly twenty miles to get to the Starbucks that I like. When I get here most of the people that work here know me and like this morning, we chat for a few minutes before I even order. They know me as the professor from Dubai…

Malaysia has been really good to me. I am getting to the point that I may try to live here because it’s been that good. It has its problems, but the people are great and the environment that I’ve been in is very relaxing. I have never been somewhere where I have felt so welcomed before. Most of the places I go I’m just another person on the metro, or just a tourist walking down the street, but in Malaysia it seems that I’m more. As I was leaving my apartment this morning the security guard gave me a salute, he’s done it before and I usually give him just a half-assed salute back. This morning though I gave him a real one, like I had to do in the military, and he busted out laughing and comes towards me to shake my hand. The whole thing was just funny… but very good.

Anyway, I don’t know where in Malaysia I’ll live if I do decide to stay here, but for now I think it’s a huge step forward to know (almost) what I want. I’ve also been told about some of the universities in the area and it may be worth the effort to try to get a job here as well. I get the feeling that if that happens instead of just living somewhere, I’d have a home.

I’ve got a friend from Taiwan that I haven’t spoken to in quite some time, well yesterday I decided to contact her. No lie, it was kind of awkward at first, but in no time we were chatting back and forth like long time friends. I like when I take a step that I usually wouldn’t and it works out. It reminds me that I have to be more outgoing. This is a trait that I seem to be able to do more and more easily lately.

I’m in JB right now, having got here yesterday at about 2pm. I’m about 60% happy to be here at this apartment, and about 40 percent not sure if I picked the right place.

The apartment is nice, I’ve got a master bedroom and am sharing the 3 bdrm with one other guy. He’s in med school and about 25 years old. Seems like a nice guy. I’ve got a pretty good view of some hills out my window and there is a communal balcony that is nice to sit on.

The forty percent is because I think I’m pretty far from everything. When I say pretty far, I am not speaking from experience since I haven’t really left the apartment since I arrived, I am mostly just speaking from what I’ve been told. Once I post this entry I’m going to head out and get some supplies, so I’ll find out for myself how difficult it is to move around here.

I’ve been in KL now for two nights, having left Brunei for greener pastures. I’m glad that I went to Brunei but only for the reason that I went. At least now I have a mental image of the country and can visualize it if it is brought up in a conversation.

So now the tough problem is where to go to next. I was nearly positive that I would be going to JB on the 25th, but now I’m not so sure. After talking to a friend here, he suggested that I’d enjoy Langkawi better. He told me it’s a beach community and is cheaper to live there than JB. He added that JB doesn’t really have anything to do.

Now I’m stuck between the two, about seventy-five percent sure that I will go to JB and twenty-five percent on Langkawi. I keep going to Airbnb.com to look at the long term rentals to each and, at least on airbnb, JB seems better. I just haven’t been able to ‘pull the trigger’ and actually commit to renting a place there.

I left KK on Monday to go to Sandakan. I was interested in seeing the orangutan conservation area. It’s been on The Discovery Channel before and it supposedly is a pretty big deal. I had a choice of either going by myself or taking a tour that would be three nights. The tour included much more than just the orangutans, but it was also kind of expensive, so I decided to just do it by myself. Big Mistake. Yeah, the orangutans were cool, but the whole thing lasted maybe an hour and a half. The park was laid out in such a way that it was more of a zoo than being a part of the experience. It was still cool to see, but to make a 7-hour trip to see it was probably not the best idea. 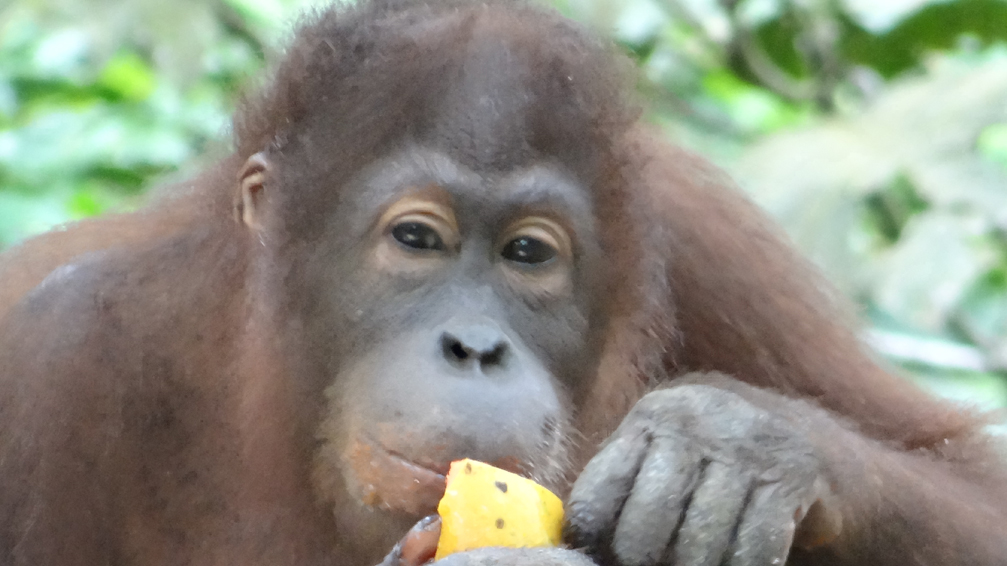 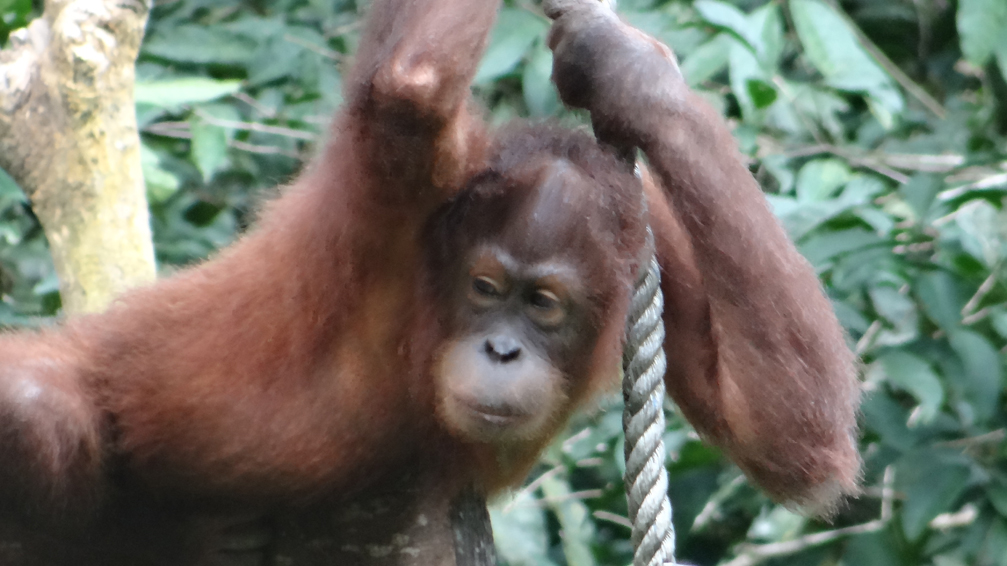 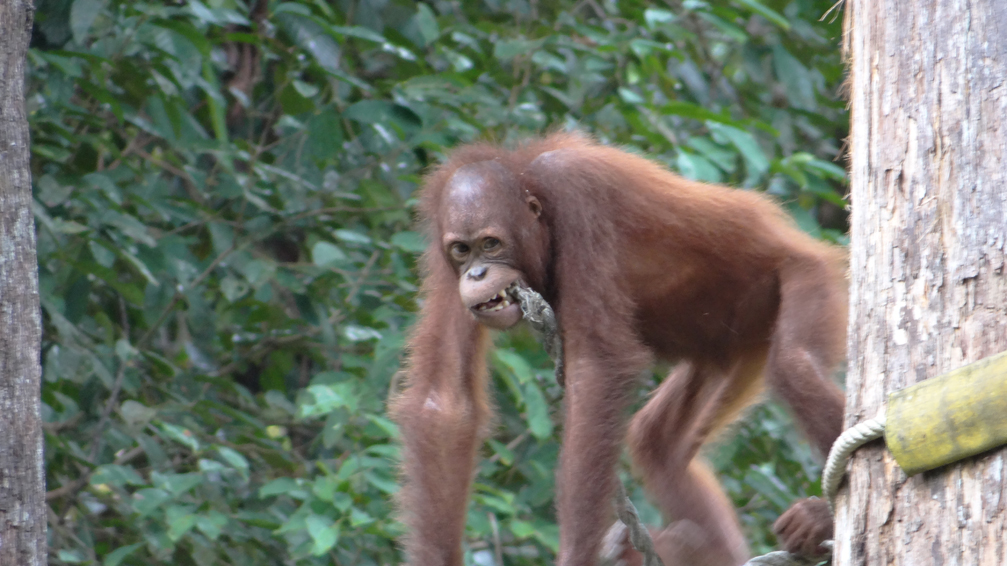 Right across the street from the orangutan park there was a Sun Bear Conservation Park. Sun bears look a lot like black bears, but maybe a bit smaller. I think I heard someone say that it is the smallest bear, but I’m not positive. The main building is very nice and after you pay your $10 you start walking up some stairs, maybe 50 or so, and you get to a deck/viewing platform. Below the deck there were about 6 bears. After I took a bunch of photos I went to go further into the park to maybe get a view of other bears… Turns out, that was it. The bears were cute and I’m glad I went, but I think the experience kind of summed up how I’ve felt about Borneo since I’ve been here. It’s kind of a tourist trap. 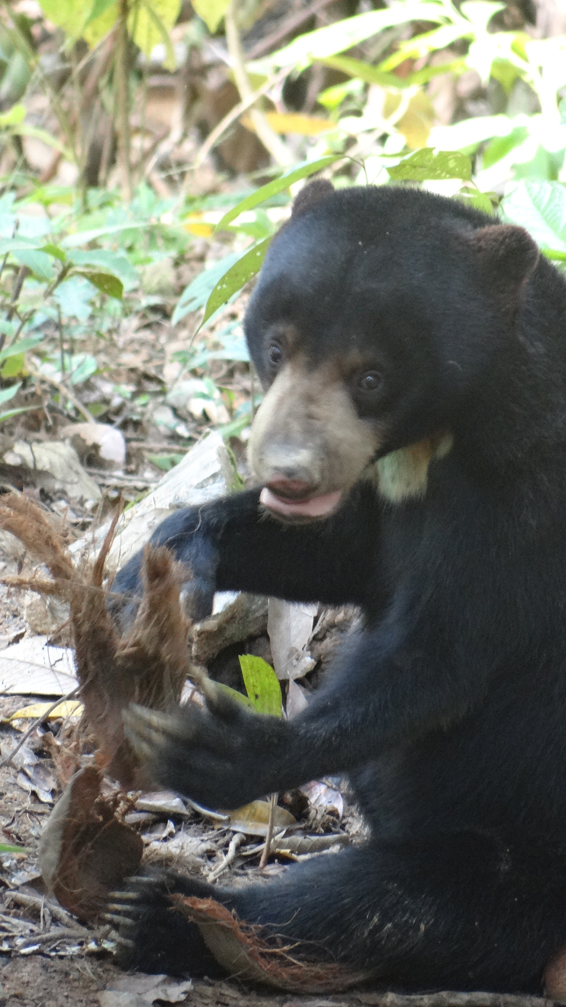 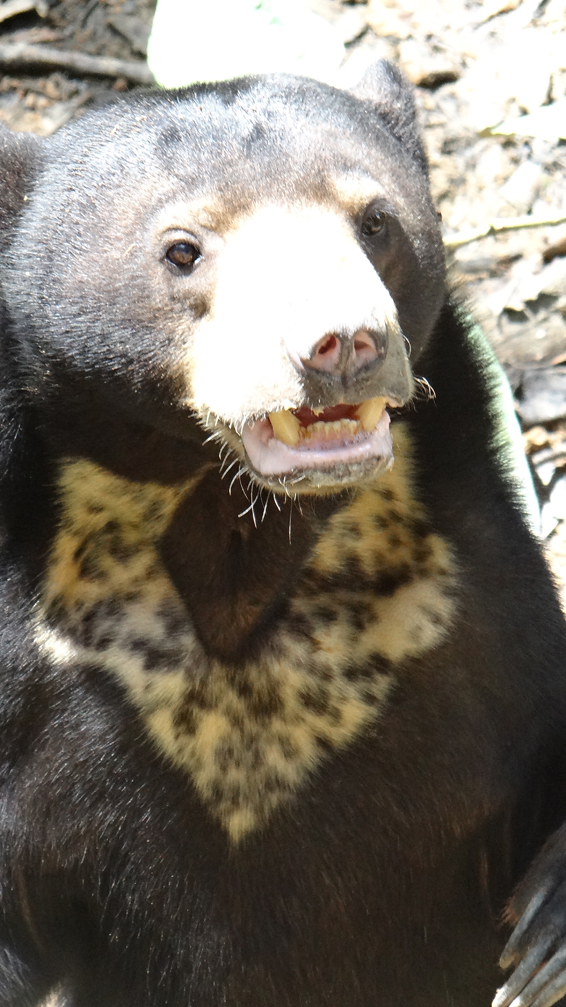 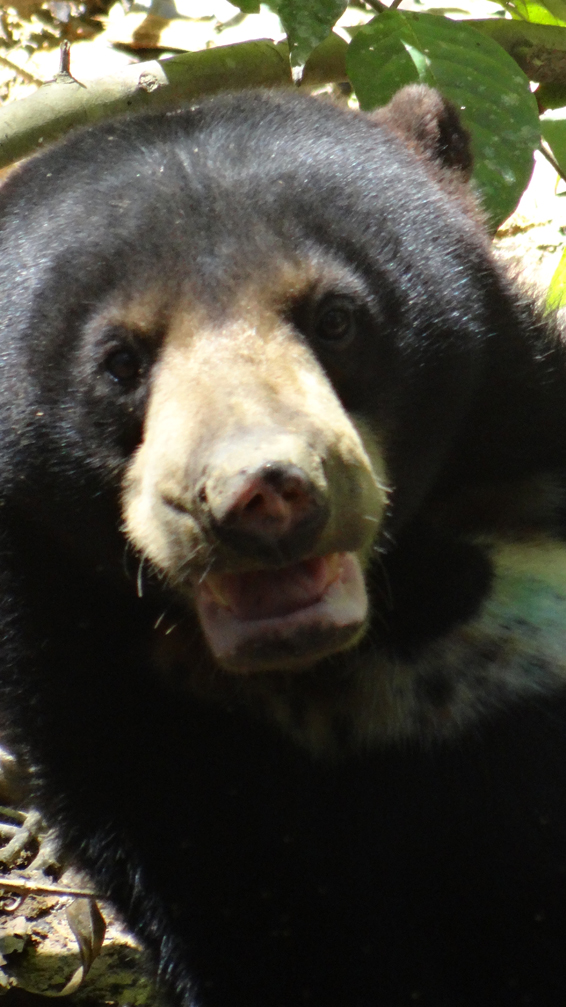 The second tour that I took was to go to the national park that supposedly was great… When I did the tour it was just okay, nothing special. But, I went with a friend that I met in Penang about two months ago. She lives in Singapore and decided to come visit me for the weekend. So yeah, the tour wasn’t very good, but I really enjoyed hanging out with Nicole. 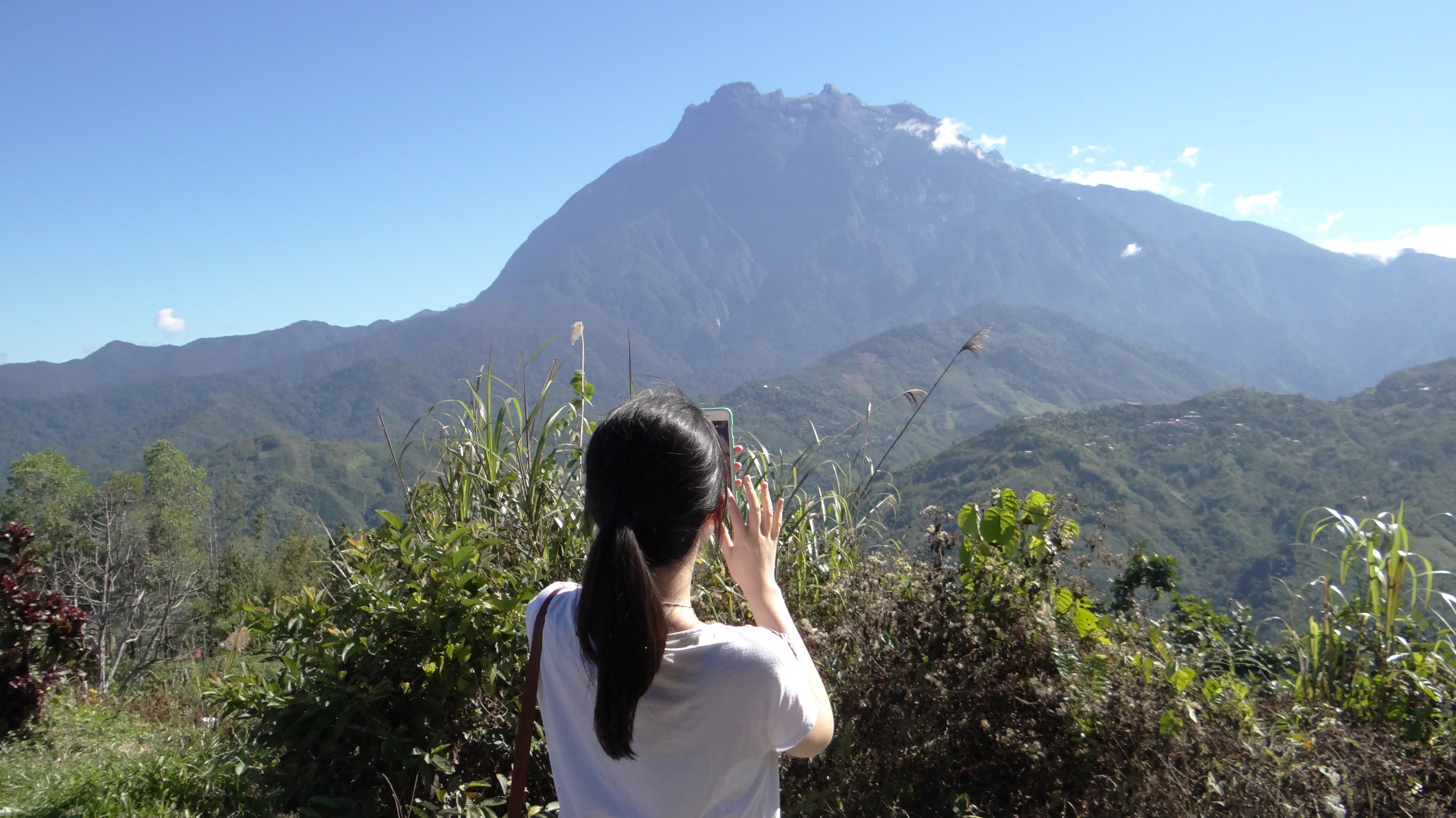 The first stop in our two-hour ride was to a vantage point overlooking the Kinabalu Mountain. Nice view, but the opportunity to stretch my legs was maybe even better. Got some good photos of scenery and of Nicole. 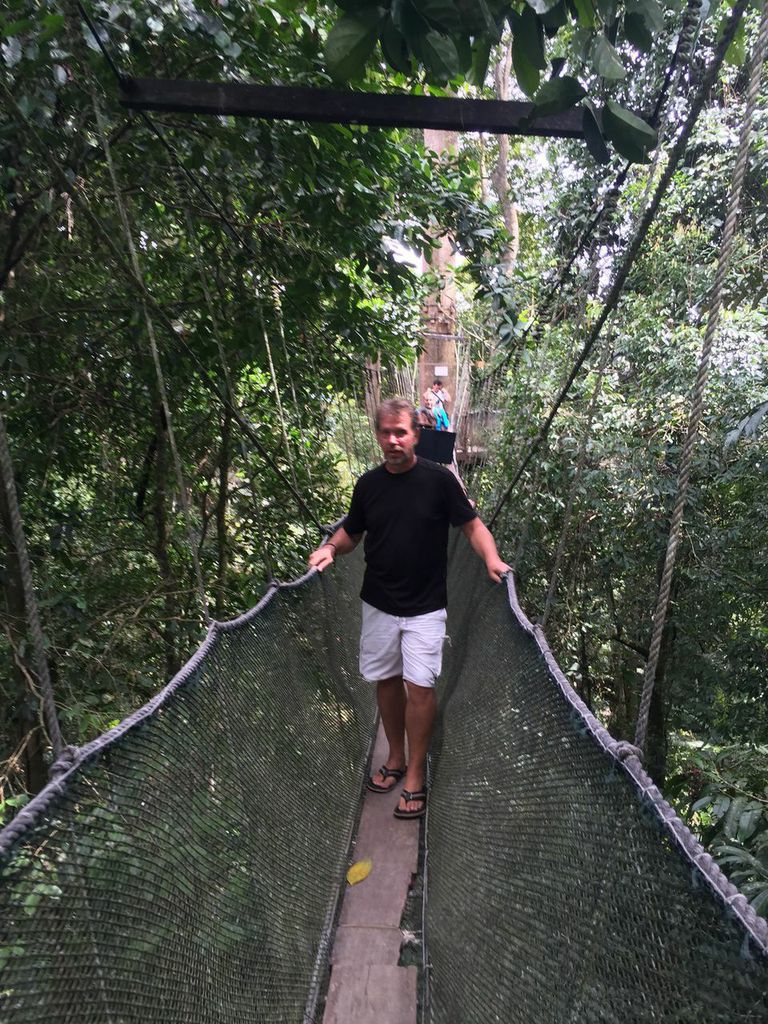 Our next stop was to a botanical garden… meh. Kind of interesting but it was something that I think I could have skipped without much of a regret. Still it was okay. 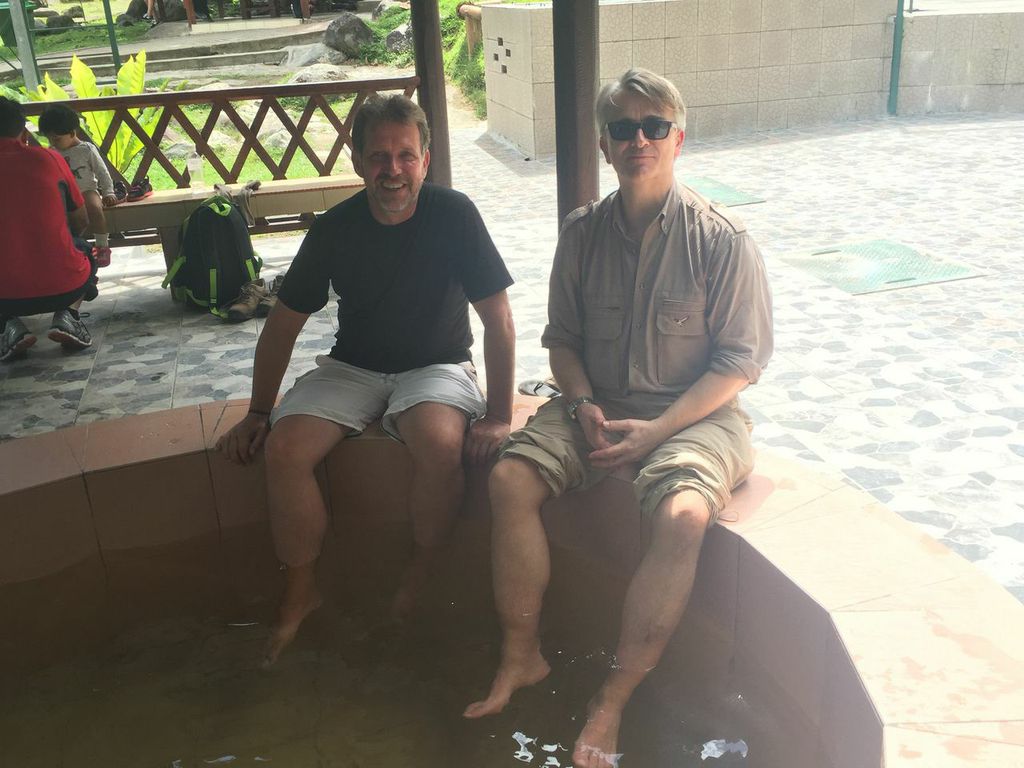 Then we headed to Poring Hot Springs and what I really wanted to do, a canopy walk. Canopy walks are basically suspended rope bridges high in the trees. Unfortunately, we went directly from lunch to the hot springs and I didn’t have my camera. I didn’t know that we weren’t getting back into the van so the photos were taken by Nicole or me using her iPhone 6. Still pretty good photos.

The canopy walk was short, too short, but still fun. I loved being up high and maybe even more fun was watching Nicole trying to walk on the bridge… I’m still smiling just thinking about it.