So I’m sitting in the bus at a stop somewhere between Lisbon and Portimao. It’s hot, really hot, and it feels good. The landscape in rural Portugal seems so much like Napa, California that if I had just woken up I think that’s where I would have guessed I’d been. The bus ride has been good so far mostly because it hasn’t been crowded, the bus seems new, and I think this is the first day trip that I’ve taken. It’s nice to be able to watch the countryside scroll past, if only to give me reference to the “real” country. 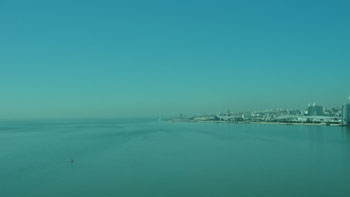 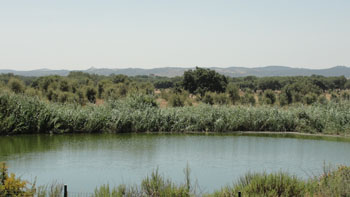 I tried to get a ticket from Portimao to Seville when I was in Lisbon, but no go. It’s kind of messed up how they do ticketing here. You can’t get a ticket out of the country from most bus services, and the domestic ticket services don’t sell tickets to other countries. That means that I have to be somewhere where the international companies go to/from and Portimao isn’t one of them. I’ll try again when I get into the city though because I heard I needed to try a specific company. Bus is getting ready to leave, so that’s it for now. 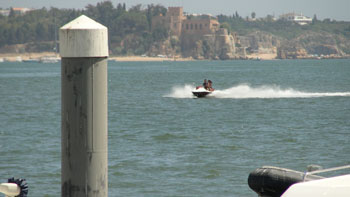 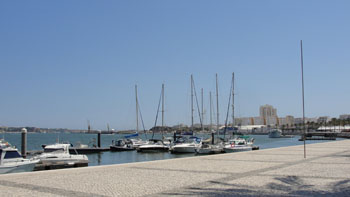 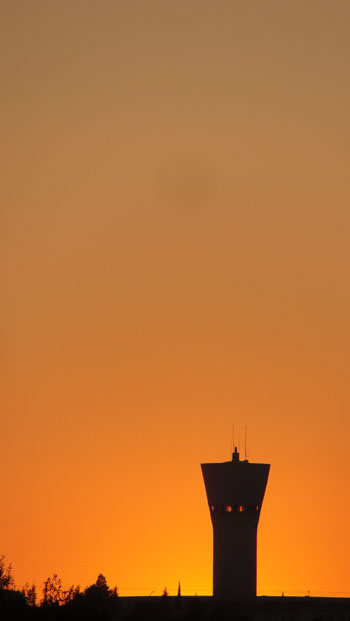 It’s about 8 right now and I’ve been in Portimao since about 230. The city is small, it’s quiet, and very relaxing. The bus dropped me off right on the marina, so the moored boats’ bobbing on blue water was a very nice first look at the city. Since then I’ve walked pretty much all around the older parts and although nice, it’s definitely not pretty. That’s not a bad thing either. I found my hostel; well today I kind of cheated. Instead of figuring out how things work, I took a taxi. I didn’t have a lot of time here so wasting an hour or two could have squandered what little time I had to explore. I also managed to get my bus ticket to Seville tomorrow as well. I had two choices, 8am or 3pm. That means that I either arrive at 2pm or 9pm. I decided on the earlier time. Unfortunately that only left the afternoon, (and possibly some more tonight) in Portimao to see what I can, but what can you do?

I met the guys staying in the same room as me and they both seem like nice guys.  One of the guys is from Germany and the other is studying in Prague. They asked if I wanted to go have a beer, or maybe go out to some clubs tonight, but I know I’m not up for it. I have to admit though, it does sound like fun.

It ended up being that only one of the guys I mentioned went out, the other one and me and one other guy from the hostel stayed up to about 1 just talking. I haven’t done that in a long time and I really enjoyed myself. I haven’t been staying in dorms much on this trip and it is one of the things that I’ve missed.

Yesterday I got my bus ticket to my next location and walked around the city a little. When I got to the ticket counter I had an idea of where I wanted to go, Portimao. It has a good location on the Southeastern coast and I thought it’d be nice to relax on a beach for a day. So that’s where I’m off to. Since getting the ticket though I’m not so sure that it was a good choice. The rooms are very expensive, there aren’t very many hostels, and the hostels that are good value are far from what I originally wanted to go there for. So anyway, I really wasn’t in the picture-taking mood yesterday, so I don’t have many things to show. I did take some photos from my hotel room of some military function going on, and a night shot as well. Generally though, not many photos from yesterday. 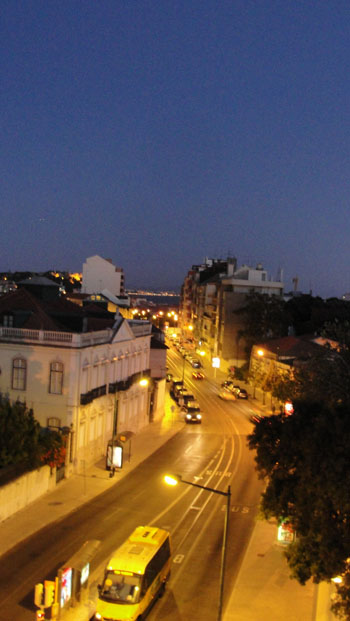 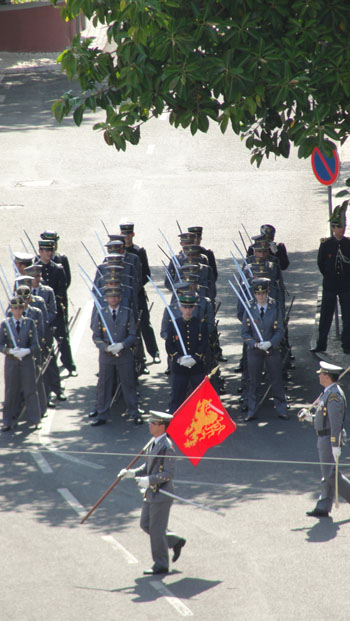 Today was my third day in Lisbon, but since the first day doesn’t really count, I’m on my second full day. It’s been nice here. I’m not sure if it’s me or it is Lisbon, but there is a slower pace to life here. The cars move fast, there are huge amounts of people everywhere you go, but for some reason I just get this feeling that life is slower here. I think that’s a good thing. In some ways it kind of reminds me of Helsinki, Finland, only with much prettier architecture. 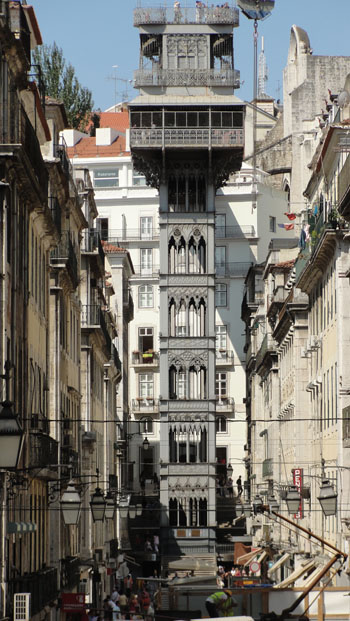 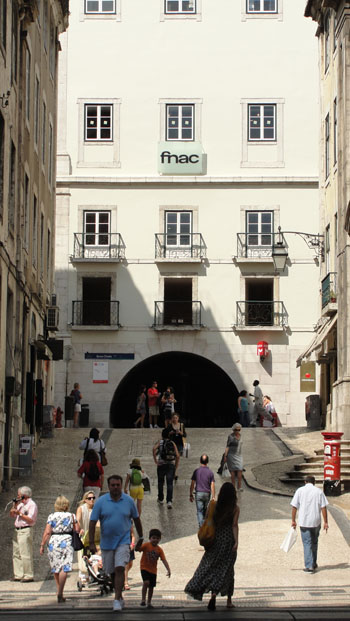 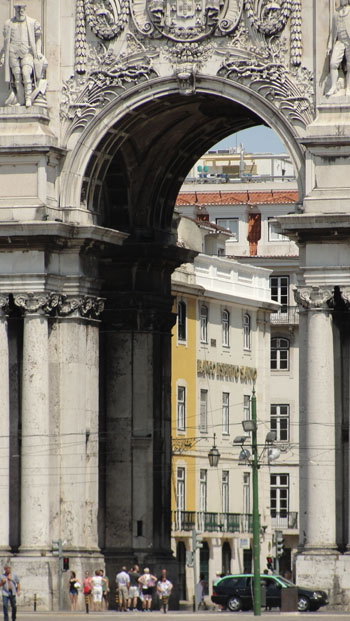 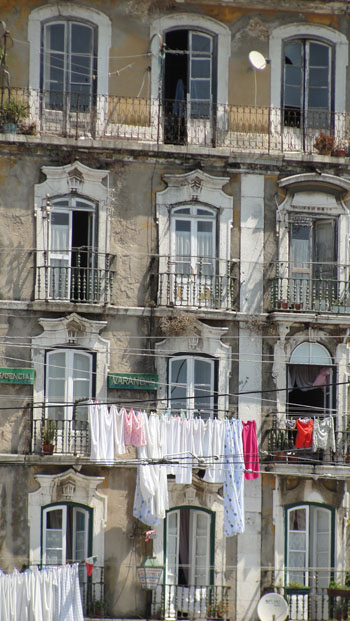 It’s about 2:30 right now and I’m back in the hotel to rest a bit before I go out again. I started at about 10 this morning with the plans to go away from the more touristy places that I’ve seen already. I did start in the touristy place though, I just wanted to see if I’d missed anything when I was there before, but after that I headed along the coast, or riverbank–I think I remember seeing on the map that Lisbon is on a river. I think for the most part it was the right decision because along the way I saw a still a beautiful Lisbon, but it was much more rundown and generally in poorer shape. There are two parts to most tourist cities, the parts that have been restored for you to take pictures of, and then there are the other parts, usually the parts where most of the people live. Some of these cities the tourist parts are the only thing that is left from history, but here in Lisbon, and as far as I can tell, the whole city has ornate buildings, cobblestone alleys, and steep hills. Except for not being as restored as the touristy places, it is still beautiful. 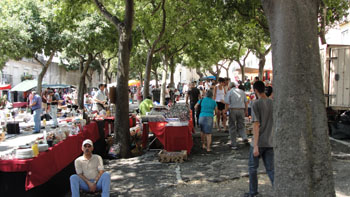 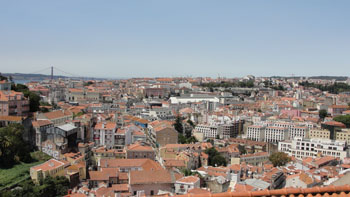 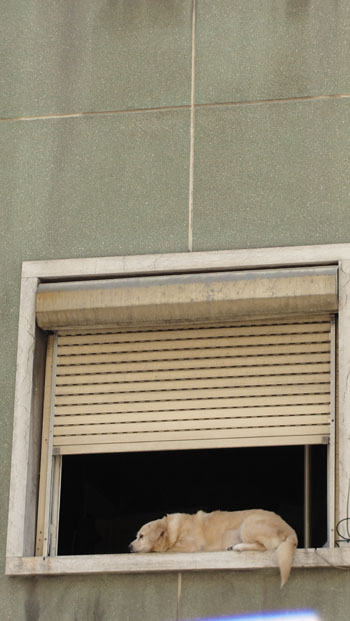 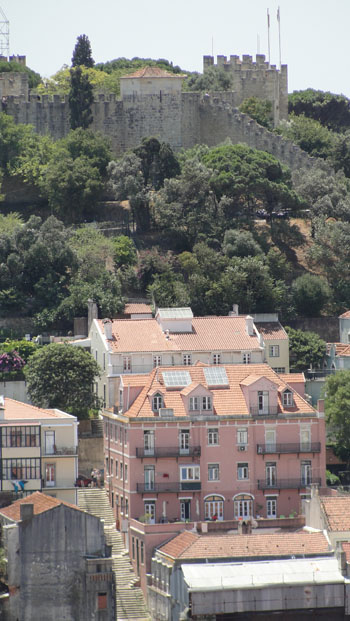 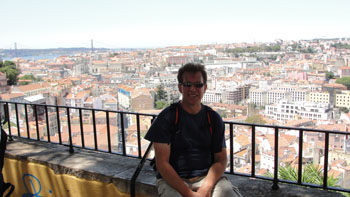 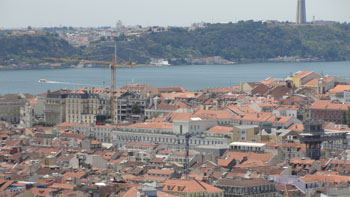 With no real destination I made my way through alleys and along streets, any street would do as long as it was going in my general directions. There were times that I just followed people, yeah, and it so happens that sometimes those people were cute girls. I went up a few hills and stumbled into a huge market. It was more like a flea market than anything else so I didn’t do much shopping. I continued to follow the vast majority of people and eventually ended up at viewpoint overlooking the city. It was very picturesque but not quite perfect. From my vantage point though I could see another viewpoint a little bit higher, and not that far away from where I was. I got there after about 15 minutes, and still it wasn’t perfect, but it was good enough. By then though my legs were burning and I wanted to get something to eat, so I decided to come back to the hotel. I stopped for lunch at a fruit market and ate as I walked.

So I got here at about 6 this morning and like I’ve done before I stayed in the bus station until I was ready to venture out, which in this case was about an hour and a half. The directions to the hostel weren’t very clear if you’re not from Lisbon, but with the help of a Metro person it was fairly easy to figure out where to go. After that I really didn’t have any problems with finding the hostel. Except when I got there it was like an residential house so I checked my email to see if in the confirmation email that the hostel had 24hr reception. There was another email there that I hadn’t read about the booking so I opened it up, it told me that I had been bumped from this hostel and moved to another at the address listed. Great. I was in the heart of Lisbon with a new address to find and it’s 8 in the morning on a Sunday. From that point on I realized how nice the people are here. I found a policeman to ask, he wasn’t sure but told me a general direction. I then found a taxi driver who gave me directions that were good for about a kilometer. The next person I asked was a bus driver and he guided me the last kilometer or so. All these people were so nice it surprised me. So although I ended up having to walk about four kilometers extra with my packs, everything turned out perfect. 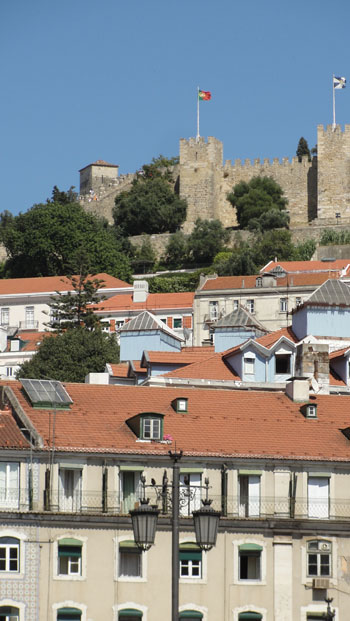 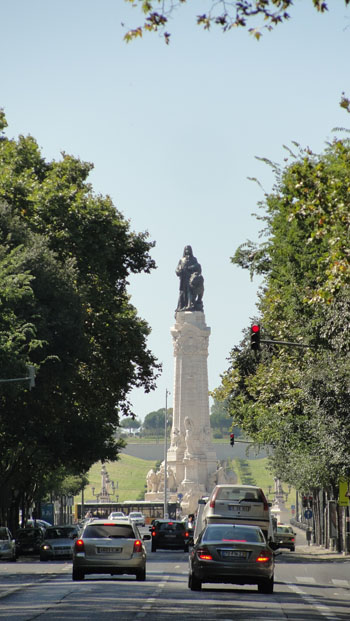 After a few hours of sleep I headed out to get a better look at the city. I only stayed out for about 5 hours but what I saw I really liked. It was Sunday so there was a very relaxed atmosphere nearly everywhere I went. I headed down towards the sea, actually I don’t know if it was a bay, sea, or the ocean, let’s just say I headed towards the water. Along the way I saw many large statues, beautiful tree lined streets, and large stone courtyards. I don’t know what the rest of Lisbon looks like, but this part is really beautifu.